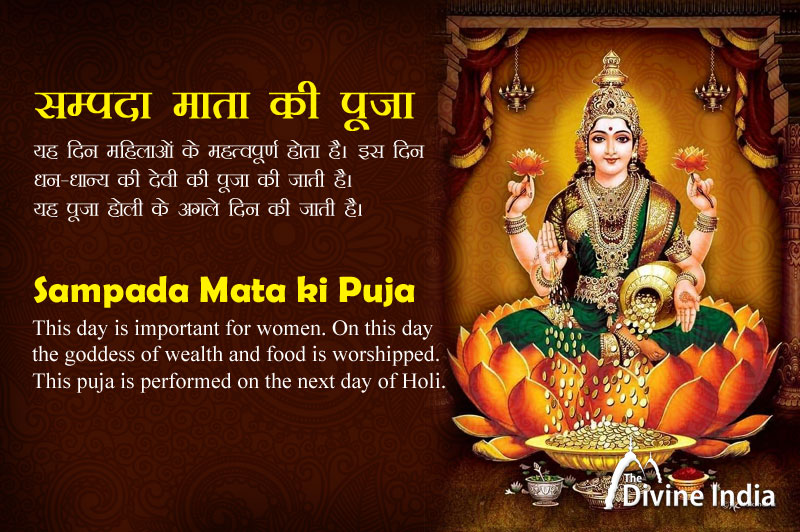 Worship of Sampada Mata is an important day in Hindu religion. This day is important for women. On this day the goddess of wealth and food is worshipped. This puja is performed on the next day of Holi. On the Pratipada of Krishna Paksha of Chaitra month, the goddess of wealth, Sampada ji ties a string and on seeing any auspicious day in the month of Baisakh, she opens the string. While tying the thread and opening the thread, they keep a fast and listen to the story. After worshiping in the fast, halwa-puri is eaten once a day. By putting sixteen strings and sixteen knots in the thread, they take color in turmeric.

The wealth goddess is worshiped as follows -

There was a king in our country - Nal. His wife's name was Damayanti. Once on the Pratipada of Chaitra month, the old lady came to Damayanti. He had tied a string around his neck with a yellow knot. When the queen asked him about the string, he said, “This is the string of wealth. Wearing it increases happiness and wealth in the house. The queen also took a string from her and tied it around her neck, when King Nal asked about the string tied around the queen's neck, the queen told all the things told by the old lady.

The king began to say, "What are you missing that you have tied the string." Saying this, the king broke the string and threw it even after the queen refused. In the night, a woman said to the king in a dream - "I am leaving and another woman said I am coming." In this way, this dream kept coming every day for twelve days. He started feeling sad. On asking the queen, the king told the queen about the dream. The queen asked the king to ask the names of the two women. On being asked by the king, the first woman said I am Lakshmi and the second told her name as poor. The next day the king saw that all his wealth was exhausted. They became so poor that they did not even have food to eat. The sad mind started spending her days in the jungle by eating the root of the tuber. On the way his five year old son got hungry. So the queen asked the king to ask for buttermilk from Malin's place. When the king asked for buttermilk from Malin, Malin said that buttermilk is over. On walking ahead, a poisoner bit the quince on the king. On moving forward, the king brought two pheasant kills. When the queen roasted the pheasant, the pheasant flew away. When the king was drying the dhoti after taking a bath, the wind blew the dhoti away. Then the queen tore her dhoti and gave it to the king. When they went ahead hungry and thirsty, the house of the king's friend came on the way. The friend made both of them in the room. When iron tools were kept there, they got absorbed in the earth. The fear of being blamed for theft ran away. Later on, the house of the king's sister came. When the king's sister sent him food in a golden platter, kept in an old palace, the plate turned into mud. The king was very ashamed. Bury the plate in the same ground and run away. On walking ahead came the house of a moneylender. The moneylender made arrangements for the stay of the king in the old mansion. There was a hero's necklace hanging on the khanti. There was a picture of a peacock on the wall nearby. He started swallowing the peacock necklace. Seeing this, they ran away from there also in fear of theft.

Now on the advice of the queen, the king started thinking of living in a hut in the forest. They went and stayed in a dry garden in the forest. That garden turned green. The owner of the garden was very pleased to see this. Swami asked them who are you two? The king said we are travelers. Came in search of a job. Swami took him as a servant. One day the owner of the garden was sitting and listening to the story and was taking Dora. On asking the queen, she told that she is the thread of wealth, the queen also took the dora after hearing the story. The king asked the queen, how is this string tied? The queen said, this is the same thread which had been broken once and thrown. And we had to face so many calamities. Sampada Devi is angry with us. The queen said, "If Mother Sampada is true, then our days will return again."

That night the king had a dream. One woman is saying I am leaving, another woman I am coming. On being asked by the king, the first woman gave her name as Paridrata and the second named her as Lakshmi. The king asked Lakshmi if she would not go now. Lakshmi said if your wife keeps listening to the story with a string of wealth, then I will not go. If you break the thread, I will go away. The mistress of the garden used to go to give a necklace to a queen, making that necklace a death. Rani liked that necklace very much. On the request of the queen, she made the mistress that we have a couple working here, she has made it. The queen asked the owner of the garden to ask for the names of both. When he came home and asked the names of both of them, he came to know that they are Nal Damayanti, the owner of the garden started apologizing to them, then King Nal told him that our days were going bad, it is not your fault.

Now both of them went towards their palace. On the way came the moneylender's house. He stayed at the moneylender's place and saw that the peacock on the wall was spouting a necklace. The moneylender grabbed the king's feet. On walking forward, he reached the sister's house. The king stayed in the sister's old palace. When the king dug that place, a plate studded with diamonds came out. The king presented a lot of money to the sister. Go ahead and stay in the same room after reaching the friend's house. Friend's iron tools were found there. On walking forward, his dhoti was found on a tree. After taking a bath, the prince who had bitten the snake was found playing. On reaching the palaces, the queen's friends welcomed her by singing the anthem. All this was the result of tying the knot of Sampada ji which turned his bad days into good days.

Blog/Hinduism
35 secrets of Lord Shiva that you should know