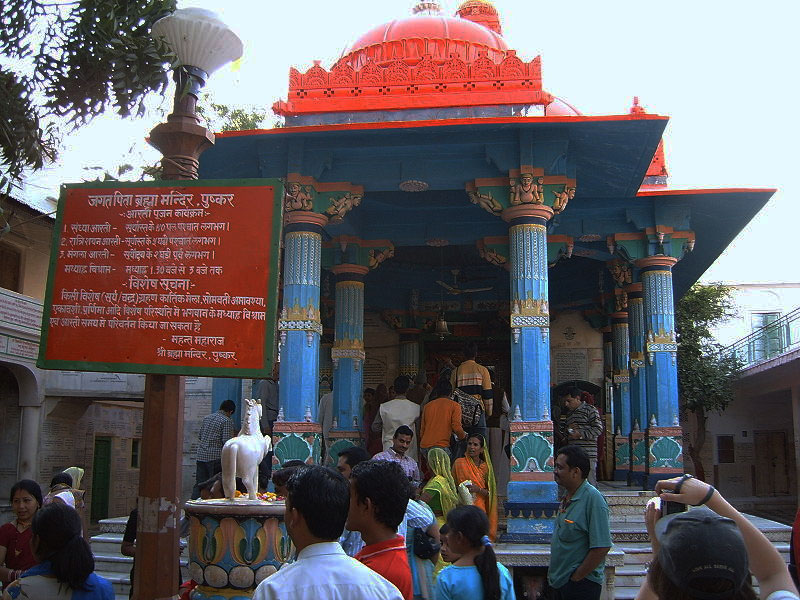 Brahma Temple is a Hindu temple dedicated to Lord Brahma Ji. This temple is located in Pushkar, Rajasthan, India. In Hindu religion, Brahma ji is called Jagatpita because Brahma ji had composed the universe. This temple of Brahma ji is one of the famous temples of India, and this temple is the most prominent among the other temples of Brahma ji. The holy Pushkar lake is near the temple. This place is also donated by people to the masses of their ancestors.

The present structure of the Brahma temple is of 14th century and it is believed that this temple is 2000 years old. It is said that Pushkar had more than 500 Hindu temples. Mughal Emperor Aurangzeb's reign (1658-1707) was destroyed in most of the temples. But later some temples were rebuilt, the most important of which is the Brahma Temple.

It is believed that this temple was built by Rishi Vishwamitra after the sacrifice of Brahma ji. It is also believed that Brahma himself chose the place for his temple here. 8th Century Hindu philosopher Adi Shankaracharya reconstructed this temple, while the present medieval structure was done by Maharaja Raja Jawat of Ratlam. King Jawat has given additional repair of the temple and the original design of the temple has been retained.

According to the Hindu sacred book Padma Purana, Brahma ji saw a demon Vajranbha demonstration of terror. Brahma ji killed that monster. During this, lotus flower fell on the earth from the hand of Brahma ji, there Pushkar Lake was derived. When the lotus flower falls, the flowers are broken into three parts and dropped to three places, where the Jyeshti Pushkar, Madhya Pushkar and Junior Pushkar Lake are derived. Then Brahma ji came to this place and where the flower ('Pushpa') fell to Brahma ji ('tax'), the name of this place was 'Pushkar'.

Brahma ji decided to yajna for the welfare of the society near the main Pushkar lake. Brahma ji was want to complete Yajna with the peace, he created the hills around the Pushkar — Ratnagiri in the south, Nilgiri in the north, Sanchoora in the west and Suryagiri in the east . To protect the performance of yajna, there are the gods established by Brahma. However,  while performing the yajna, his wife Saraswati could not be present at the on time to participate in the yagna because she was waiting for her companion goddess Lakshmi, Parvati and Indrani. Because the yajna could not be fulfilled without the his wife. So Brahma married Gayatri and complete the yagya.

When Saraswati finally reached the place, he found Gayatri sitting next to Brahma, which was the place of Goddess Saraswati. In anger, Saraswati cursed Brahma ji that of course he is a god but he will never be worshiped. Because Brahma ji was given with Lord Vishnu ji. Goddess Saraswati also cursed Lord Vishnu that he too would be separated from his wife. Then Goddess Gayatri urged Saraswati to take back his curse, when the anger of Goddess Saraswati was calm, then Goddess said that worship of Brahma ji will be only in Pushkar. Vishnu will be born in the form of Rama and in the end will be separated from his wife. Thus, Pushkar Temple is considered to be the only temple dedicated to Brahma. After that Saraswati (Savitri) went to Ratnagiri hill, there is a temple in his honor. Which can be seen from Lake Pushkar.

The strict rules are followed by the priest of the Brahma temple. Married men in this temple are not allowed to worship the deity and enter the holy place. Only the monks can worship the deity here. Therefore, all the offerings by the pilgrims are given from the outer hall of the temple, through a priest who is a monk. Pushkar is normally associated with the temple priest, Parashar Goth (dynasty).