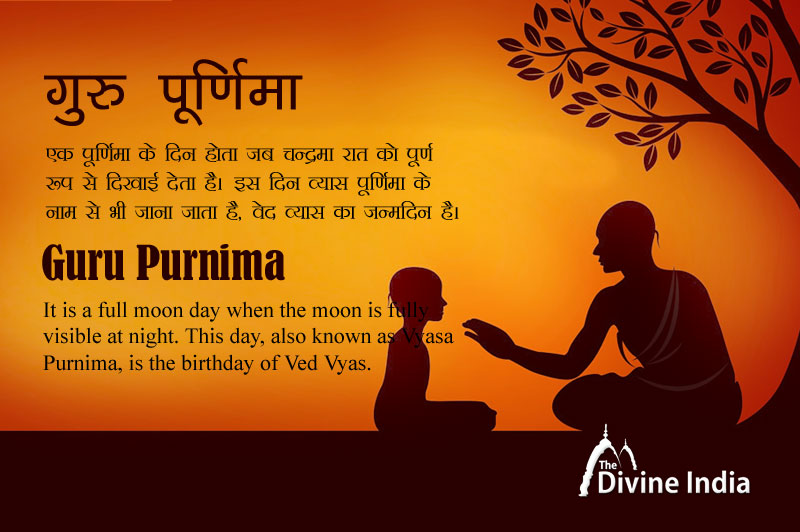 Guru Purnima is a special day for Hindus. A full moon day occurs when the moon is fully visible at night. This day also known as Vyas Purnima, is the birthday of Ved Vyas. There is a law of worship of Guru on this day. The religious gurus of Hinduism are worshiped by their followers. Guru Purnima comes at the beginning of the rainy season. On this day all saints take bath in the Ganges river together.

This day is also the birthday of Krishna Dwaipayan Vyas, the author of Mahabharata. He was a Sanskrit scholar and also composed the four Vedas. For this reason, he is also named Ved Vyas. He is called Adiguru and Guru Purnima is also known as Vyasa Purnima in his honor. It is the day when Ved Vyas was born in the Mahabharata period by Sage Parashar, the daughter of a fisherman, Satyavati. Bhaktikal's saint Gheesadas was also born on this day, he was a disciple of Kabirdas.

What is the Guru? It is told by a verse. Which is as follows: -

In a verse for equality between the Guru and the deity, it has been said that the need of devotion is for the deity as it is for the guru as well. Rather it is possible to interview God with the grace of Sadhguru. Nothing is possible in the absence of the Guru's grace.

Guru is Vishnu, Guru is Lord Maheshwara. Guru is verily the supreme reality. Sublime prostrations to Him.