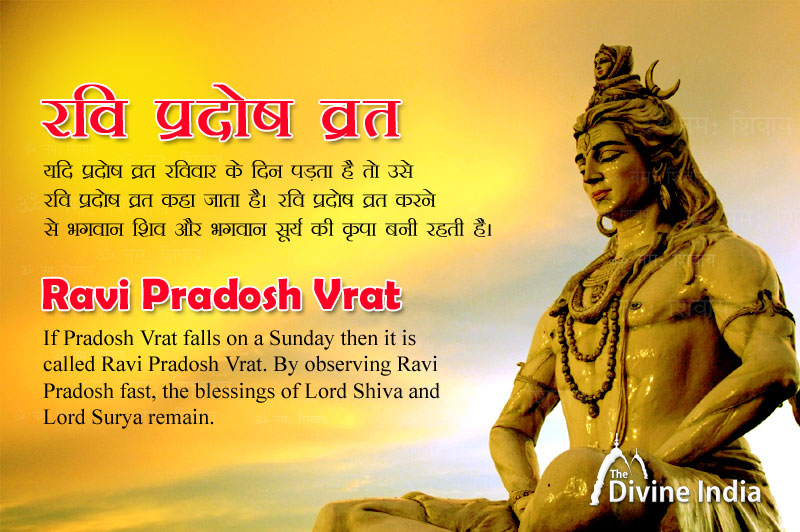 What is Ravi Pradosh Vrat

In Hindu scriptures, the importance of Ravi Pradosh fast has been told in the Puranas. By observing the fast of Surya Pradosh, lost honor is attained and Lord Shiva and Suryanarayana also bestow blessings of good health in future. There is also relief in heart disease by chanting some special mantras.

The worship of Lord Shiva in Ravi Pradosh Vrat is done in the evening time around 45 minutes before sunset and 45 minutes after sunset.

According to the legend, a poor Brahmin family lived in a village. The wife of that brahmin used to observe Pradosh fasting methodically. One day that son was going out of the village, when some thieves surrounded him on the way. The thieves snatched his bundle and asked him to tell about the secret money of his house. The boy said that there is nothing in the bundle except roti and his family is very poor, there is no hidden wealth in his house.

The thieves left him and moved on. The boy slept in the shade under a banyan tree in the city. Then the king's soldiers came there searching for the thieves and took that child as a thief and put him in jail.

When the child did not reach home even after sunset, his mother got upset. On that day she was observing Pradosh fast. The child's mother prayed to Bholenath at the time of Shiva worship that her son should be well, protect him. Lord Shiva heard the call of that mother. Then Shiva ordered the king to free the child from the prison in a dream. Also said that that child is innocent, if you keep him captive, then you will be destroyed.

The next morning the king ordered the child to be released. The boy came to the court and told the whole incident to the king. On this the king called his parents to the court. The Brahman family was scared to be called to the court. Somehow they went to the king's court. The king said that your son is innocent, he has been set free. The king donated five villages for the livelihood of the Brahmin family.
By the grace of Lord Shiva, that Brahmin family started leading a happy life. In this way the glory of Pradosh Vrat has been described.