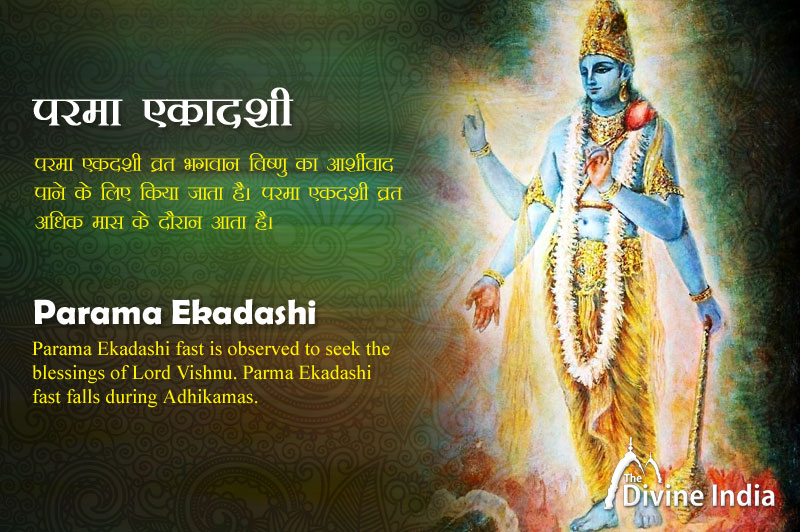 The fast of Ekadashi is the fast that destroys all sins and gives all the desired fruits. The fasting of Ekadashi is especially dear to Lord Vishnu. This fast is going to give salvation to any person of the society like Brahmin, Kshatriya, Vaishya, Shudra and woman - whoever observes this fast with devotion. It provides humans with all their desired things.

Waking up early in the morning on Ekadashi, worshiping Lord Vishnu with scent, flowers, etc., after taking bath and defecation, say as follows-

Meaning - Kamalnayan Achyut! On Taj Ekadashi, I will eat food on the second day after fasting. You are my refuge.

Paran means breaking the fast. Ekadashi is celebrated after sunrise on the next day of Ekadashi fast. It is necessary to do Parana within Dwadashi Tithi unless Dwadashi ends before sunrise. Not doing Parana on the day of Dwadashi is like a crime.

Shri Yudhishthirji said that - O Janardan! Now you tell the name of the Ekadashi of Krishna Paksha of Adhik (Laund) month and the method of its fasting. Shri Krishna said that O Rajan! The name of this Ekadashi is Parma. By observing this fast all the sins are destroyed and one gets freedom in this world and in the hereafter. Its fasting should be done in the aforesaid method and Lord Narottam should be worshiped with incense, lamp, naivedya, flowers etc. Let me tell you a beautiful story about this Ekadashi which happened with the great sages in the city of Kampilya. You listen carefully. A Brahmin named Sumedha lived in Kampilya Nagar. Read More...

Blog/Divine Ayurveda
What is Ayurveda?