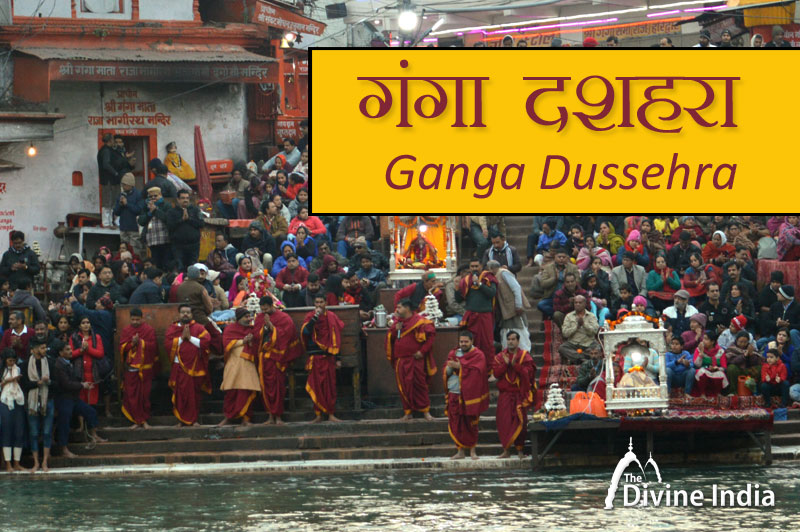 The festival of Ganga Dussehra is celebrated on the tenth day of the Shukla Paksha of Jyeshtha month. This day is a special day for Hindus as well as all mankind. Ganges Dussehra falls in the months of May and June. On Jyeshtha Shukla Paksha Dashami on Monday and Hasta-nakshatra, this date is considered to destroy the sins. Gangavataran took place on Wednesday in Hasta Nakshatra, on this date Ganga Dussehra is also known as Gangavataran. Therefore, this date is more important. On this date, ten sins are destroyed by bathing, charity, and tarpan, hence it is called Dussehra.

This is the day when Ganga was brought down to earth to cleanse the cursed souls of her ancestors and destroy sins. Before coming to earth, Goddess Ganga was residing in the kamandal of Lord Brahma.

Bathing in the Ganges has special significance on this day. All the sins of a person are destroyed by bathing the Ganges. The Ganges does not rot even if it is kept year round.

In ancient times, a king named Sagar ruled in Ayodhya. He had two queens named Keshini and Sumati. Keshini had a son named Anshuman and Sumati had sixty thousand sons. Once King Sagar performed the Ashwamedha Yagna. A horse was left for the Yajna fulfillment. Indra stole the horse and tied it in Kapil Muni's ashram to dissolve the yagna. Kapil Muni was doing penance. The king asked his sixty thousand sons to bring a horse. The king's sons reached the ashram of Kapil Muni, which disrupted the austerity of Kapil Muni and the anger of Kapil Muni was consumed by the fire.

Seeing his brothers after getting permission from the father of Anshuman, when Kapil reached Muni's ashram, Gurud ji told all the accounts of his brothers being consumed. Garuda ji also told Anshuman that if he wants his liberation, then Ganga ji will be brought from heaven to the earth.

After the death of Maharaja Sagara, Anshuman meditated to bring Gangaji to earth, but he failed. After this, his son Dileen also did penance but he also failed.

In the end, Dileep's son Bhagiratha went to the Gokarna Tirtha to do austerities to bring Gangaji to earth. Pleased with the austerity of Bhagiratha, Brahmaji gave the boon to take Ganga to earth. Now the problem was that after leaving Brahmaji's corpuscle, who would handle the velocity of Ganga on earth. Brahmaji said that none other than Lord Shankar have this power in the land which can handle the velocity of the Ganges. Therefore, it is appropriate that Lord Shiva be favored for handling the velocity of the Ganges. Bhagirath stood on one thumb and started worshiping Lord Shankar. Pleased with the harsh penance of Bhagiratha, Shivji agreed to handle Ganga in his jatas. In this way, with the inclinations of Lord Shiva, Ganga ji went to the plains by making a chalk in the valleys of the Himalayas.

Pleased with this act of Bhagiratha, Brahmaji declared that Gangaji would also be known as Bhagiratha on earth. In this way, mother Ganga came to earth.