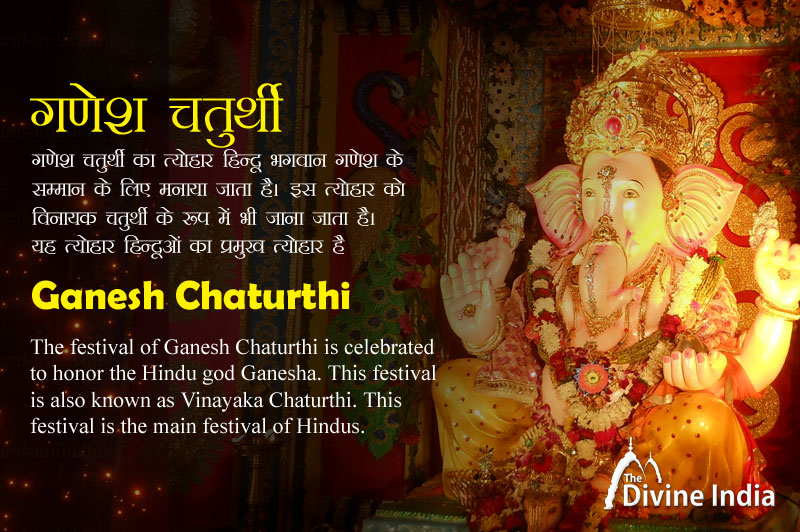 The festival of Ganesh Chaturthi is celebrated to honor the Hindu god Ganesh. The festival, also known as Vinayaka Chaturthi is observed in the Hindu calendar month of Bhaadrapada, starting on the shukla chaturthi (fourth day of the waxing moon period) and lasts for 10 days, ending on Anant Chaturdashi (fourteenth day of the waxing moon period). People start celebrations by preparing months in advance by making eco-friendly idols, artistic clay models of Lord Ganesha and decorating the idols. The size of these idols vary from inches to feet. Ganesh Chaturthi starts with the installation of these Ganesh statues in colorfully decorated homes and specially erected temporary structures mandapas (pandals) in many localites. The pandals are decorated using decorative items like flower garlands, lights, etc.. Some pandals are made theme based which depict religious themes, events related to Lord Ganesha or sometimes current events. The collective celebrations of Ganesha Chaturthi dates back to early 1890. At that time the society was divided on the basis of caste and relegious beliefs. LokManya Bal GangaDhar Tilak decided to bring the divided society into one thread and asked the people to come together and celebrate the festival in collective manners.

During the celebrations, the chanting of mantras invokes the presence of Ganesha. This ritual is the Pranapratishhtha. After this, the ritual called as Shhodashopachara (16 ways of paying tribute) follows during which Coconut, jaggery, modaks, durva blades of grass and red flowers are offered. The statue of Lord Ganesha is anointed with red unguent, made of kumkum and sandalwood paste. The festival ends with Ganesha visarjana during which these installed statues of Lord ganesha are immersed into the water bodies sea and river.

The festival is prominently celebrated in western part of India in the states of Maharashtra and Gujarat apart from southern India and all over the world among hindu communities.

Meaning:
1: O Lord Ganesha, of Curved Trunk, Large Body, and with the Brilliance of a Million Suns, 2: Please Make All my Works Free of Obstacles, Always.

On this day, after bathing in the morning, an idol of Ganesha should be worshiped with gold, copper, silver, clay or cow dung. At the time of worship, we offer twenty-one Modakas and should offer twenty-one seedlings of Green Durva to the following ten names -

Godess Parvati created Ganesha out of sandalwood paste that she used for her bath and breathed life into the idol. She then set him to stand guard at her door while she bathed. When Lord Shiva returned from outside and as Ganesha didn't know him, he didn't allow Lord Shiva to enter. Lord Shiva became enraged and asked his follower Ganas to teach the child some manners. Ganesha being very powerful, defeated everyone and did not allow anyone to enter inside while his mother was taking bath. Finally angry Lord Shiva severed the head of the child Ganesha. After seeing this Godess Parvati became enraged and then Lord Shiva promised Her that the child will be alive again. The ganas searched for the head of person in North direction, but they could not find and human and instead brought the head of an elephant. Lord Shiva fixed it on the child's body and brought him back to life.