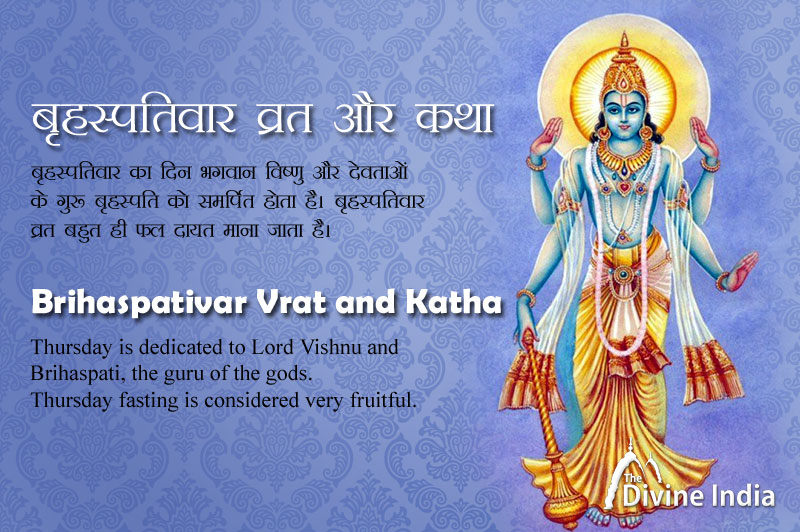 Lord Srihari is worshiped on Thursday. On this day, all the wishes of the devotees are fulfilled by observing fast and worshiping Lord Shri Hari Vishnu. Banana tree is also worshiped on this day, as the banana tree is considered very sacred in Hinduism and banana leaves are used in the worship of Lord Vishnu.

On this day there is also a law to worship the Guru of the gods, Brihaspati Dev. Brihaspati Dev is considered to be the factor of intelligence. By observing this fast, Lord Jupiter is very pleased and there is benefit of wealth and knowledge.

This fast should be started on the day of Anuradha Nakshatra and Thursday in the Shukla Paksha of any month. By observing regular seven fasts, the evil arising from the planet Jupiter is destroyed.

At the time of Katha and worship, one should pray to Brihaspati Dev for fulfillment of desires after being purified from mind, deed and words. Yellow colored sandalwood, food, clothes and flowers have special significance in this fast.

After getting up before sunrise, after retiring from the bath, wear yellow clothes. Purify the whole house by sprinkling pure water. Install the idol or picture of Thursday at any holy place in the house. After that, worship with the smell of yellow color, flowers and Akshat according to the law. After this pray with the following mantra-

After that listen to the fast story by doing aarti. In this fast, food is eaten only at one time. Banana tree is worshiped during Thursday's fast. This fast is considered very important for women.

It's a matter of ancient times. There was a big dealer in a city. He used to send the goods in the ships and sent it to other countries. The way he earned more money, he used to donate and donate himself, but his wife was very stingy. He used to give anyone to give a thicker. Once Seth, when the other country went to do business, Before Bathsdev asked for his wife in a sadhus-vesh. Merchant's wife said to Thursdayev, Sadhu Maharaj, I am fed up with this donation and virtue. You tell a solution that all my wealth is destroyed and I can stay comfortable. I can not see this money looted

Thursday said, "O Goddess, you are very strange, no one is unhappy with children and money. If there is more money, then put it in auspicious work, marry virgin girls, build school and garden gardens. By doing such a virtuous, your people may be worthwhile, but with these things of the monk, the merchant's wife was not happy. He said - I do not need such funds, which I donate. Then Thursdayev said, 'If you have such a desire then you make a measure. Seven Thursday to watch the house from dung, wash your hairstyles with a yellow soil, bathing hairstyles, to shave the merchants, eat meat-liquor food, wash your home. By doing so, all your wealth will be destroyed. By saying so much, Thursday became underway.

The merchant's wife decided to do the same as it is as follows of Jupiter Dev. Only three were spent on Thursday that the same wealth was destroyed and he was closed. When the trader came back, he saw that everything has been destroyed. That trader consoles his daughter and settled in another city. There he brings wood cut from the wood and sells in the city. In this way he started spending his life.

One day his daughter expressed the desire to eat curd but the merchant did not have the money to buy yogurt. He went to cutting wood in the jungle by assuring his daughter. Sit down under a tree, considering his former condition. That day was Thursday. Only then did Jupiter Dev came to Seth as a sadhu and said, 'Humans, what are you sitting in this forest?'

Then the merchant said, 'O Maharaj, you know everything.' By saying so much, the businessmen cried by telling his story. Jupiter Dev said, 'Look son, your wife had insulted Jupiter Dev. This is why you have happened. But now you do not worry about any kind. You read Jupiter Dev on Thursday day. By adding sugar to the gram and jaggery of two money, they divide Amrit and Prasad in their family members and the story listening. Take your own offerings and steps. God will welfare you. '

Listening to the sadhu, the merchant said 'Maharaj. I can not save so much that I can bring my daughter to another. 'Sadhu ji said,' You go to sell the woods in the city, you will meet the price of the wooden already, so that all your work will be proved. ' Cantt and moved to sell in the city. His woods were sold in good prices, so that he took curd for his daughter and brought himself to the story of Chana, jaggar for a Thursday's story and divided himself. From the same day all his difficulties started to get away, but on the next Thursday, he forgot to do the story.

The next day, the king organized a big sacrifice and organized a banquet for the people of the whole city. According to the King's command, the whole city went to banquet in the king's palace. But the merchant and his daughter reached the delay, so both of them took food to the palace and made food. When they both came back, the queen saw that the defeat on his peg is missing.

The queen suspected the trader and his daughter that his defeat has stolen them. Both of them were imprisoned in imprisonment closet by the King's command. Both were very sad to capture. There he remembered Jupiter God. Jupiter Dev appeared and impressed his mistake and advised him that you will get two money on the door of capturing on Thursday, you will be able to worship the Jupiter God by paying you gram and Munaka. All of you will get away.

On Thursday, he got two money at the door of imprisonment. A woman was going out on the road. The trader asked him to bring caller jaggery and gram. The woman said on this' I am going to take jewelry for my daughter-in-law, I do not have time. "By saying so much he went away. After a while, another woman came out of there, the trader called him and said that the sister I have to make the story of Thursday. You bring me a jaggery of two money. Hearing the name of Jupiter Dev, he said, "Brother, I bring you jaggery. My only son has died, I was going to take a shroud for him but I will do your work before, after that I will bring shroud for my son. '

He took a jaggery for the merchant from the woman market and he himself heard the story of Jupiter Dev. On the end of the story, he went to his house with a woman's shroud. At home, people were preparing to take the cremation of his son's body called 'Ram Nam Satya'. Female quote 'Let me look at the face of your boy.' Seeing the face of his son, that woman put off and presented in her mouth. With the influence of Prasad and Phase, he was alive again.

The first woman who had disrespected Jupiter Dev, when she returned to the son of her son for the marriage of her son and as soon as she sat down at her son's mare, the mare hit such a bouncing that she died from the mare. Seeing this, a woman began to apologize to Jupiter Dev. With the help of that woman, Jupiter Dev Sadhu has reached there and started saying 'Goddess. You do not need to moan more. It has happened due to the grave of Jupiter. You go back and see the story by sorry my devotees, then your wish will be completed. '

Going to jail and she apologized to the dealer and listened to the story. After the story, he returned his house with Prasad and Chalamrat. Come home and put it in the face of his dead son. With the effect of Philippine, his son was alive too. That night, Jupiter Dev came to the dream of Raja and said, 'O Rajan. The merchant and his daughter who have imprisoned in jail are absolutely innocent. Your queen's neck is tortured on the peg. '

If the day came out, the King Rani saw hanging on the peg. The king released that businessman and his daughter and gave him half a state to marry his daughter in a total and gave diamond gems in dowry.