Meaning of couplet - Change of heart 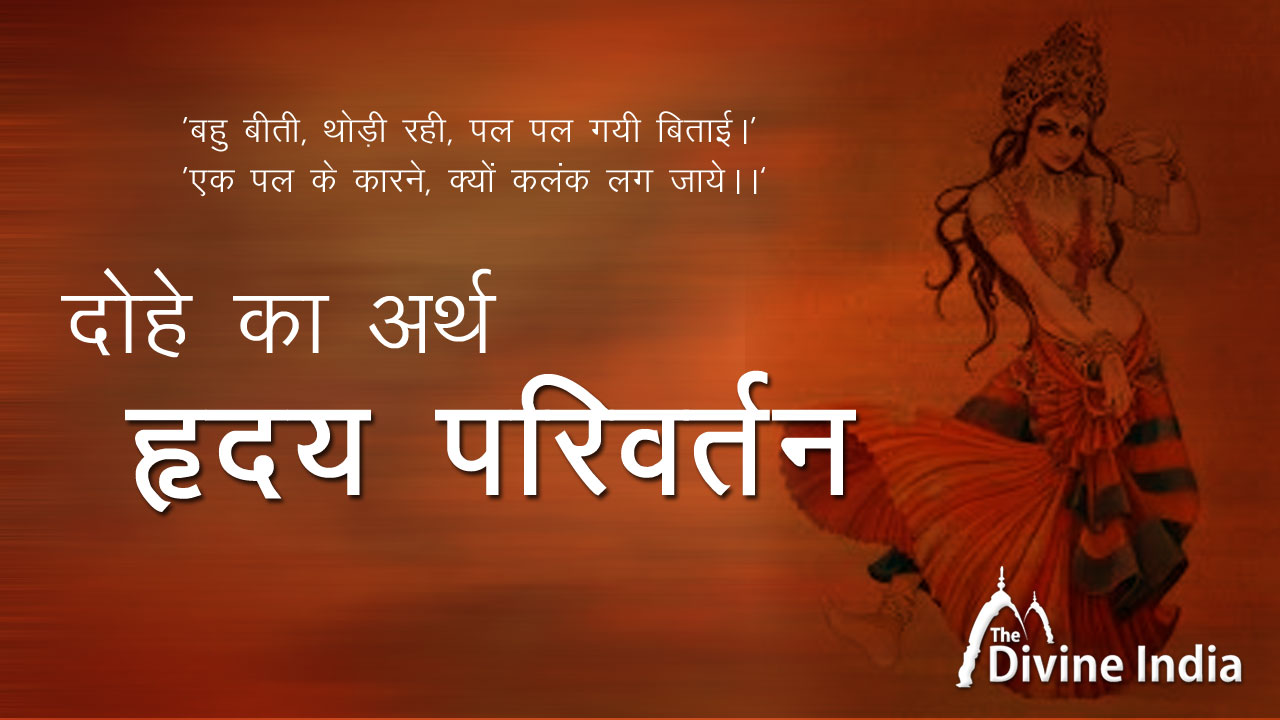 It had been a long time for a king to enjoy the kingdom. Hair was also becoming white. One day he kept a celebration in his court and also invited his Gurudev and kings of friendly country. The state's famous dancer was also invited to make the festival interesting.

The king also gave some gold coins to his guru, so that if he wishes, he can reward the dancer on good song and dance. The dance continued throughout the night. Bella of Brahma Muhurta came. The dancer saw that my tabloid was rising, to awaken it, the dancer read a couplet -

Now this couplet has been interpreted differently by different individuals. The tabla started playing alert and alert.
When Guru ji heard this, he threw all the pieces in front of that dancer.

When the same Doha dancer read again, the king's girl presented her Navlakha necklace to the dancer.

When he repeated the same couplet, the king's son, the crown prince, turned off his face and dedicated it to the dancer.

When the dancer started repeating the same couplet, the king said, "Imagine, with a couplet you have robbed everyone even after being prostituted."

When the King's Guru heard this, the Guru's eyes welled up and the Guru said - "King!" Do not call it prostitute, it has become my guru now. It has opened my eyes. It is saying that I continued to do devotional devotion all my life and at the last moment, seeing the dancer's face, I have come here to destroy my practice, brother! I walked away. ”Saying this, the Guru took up his mantle and walked towards the forest.

The king's girl said - 'Father! I am young. You have closed your eyes, were not marrying me and tonight I had to waste my life by running away with your Mahavat. But this dancer has informed me that you will get married sometime in a hurry. Why is your father bent on tarnishing? '

The Crown Prince said - 'Father! You have grown old, yet you were not giving me the secret. I had to meet your soldiers tonight and get you killed. But this dancer explained that Pagle! If not today, then tomorrow you have to meet the secret, why take the stigma of your father's blood on your head. Be patient. '

When the king heard all these things, the king also became self-knowledge. The king got a feeling of disinterest. The king immediately decided - "Why don't I just crown the crown prince. What was it then, at the same time the king coronated the crown prince and told his daughter - daughter!" One to one princes have come to the court. You can choose your husband as a husband by putting a garland on the neck of any prince of your choice. 'The princess did the same and the king renounced all and went to the Guru's shelter in the forest.

Seeing all this, the dancer thought - So many people have improved from my couplets, but why have I not been able to improve? At the same time, the dancer also got disinterest. He decided at the same time that from today onwards I shut down my bad business and said, 'Lord! Forgive me of my sins. Just today, I will only do your name.

It is a matter of understanding, the world does not take long to change. Two lines of a couplet can also cause a change of heart. One just needs to think a little patient.

It should not be melted by praise, boiled by criticism. Keep doing deeds in a selfless way. Because of this body, on this earth, everything will remain…

Blog/Story
Can I Donate Something