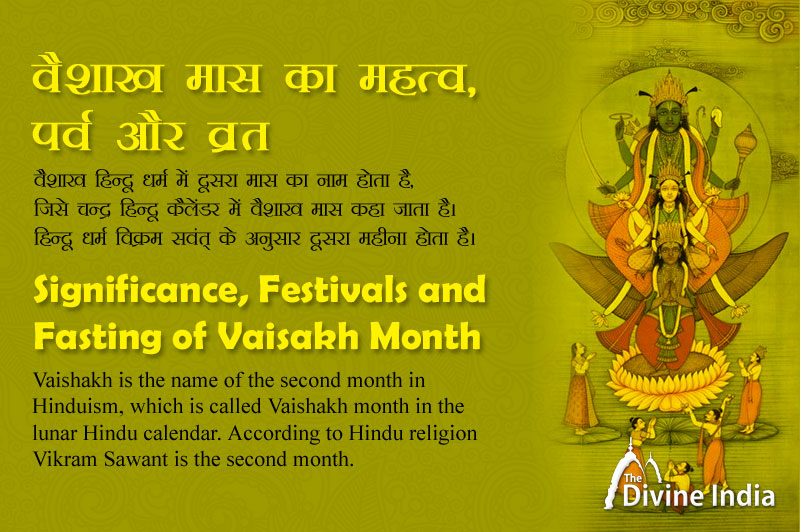 Vaishakh is the name of the second month in Hinduism, which is called Vaishakh month in the lunar Hindu calendar. According to Hindu religion Vikram Sawant is the second month. The months of April and May are in the Gregorian calendar.

Vaishakh month is starting from 17th April 2022 and ends on 16th May 2022. According to the Hindu calendar, each month has its own importance, thus Vaishakh month also has its importance.

It is believed that Lord Vishnu took many incarnations on the day of Akshaya Tritiya on the Shukla Paksha of this month. Such as the incarnations of Nar-Narayan, Parashurama, Narasimha and Hayagriva. On the ninth day of Shukla Paksha, Goddess Lakshmi appeared from the earth in the form of Sita.
It is also believed that Tretayuga also started from the month of Vaishakh. Due to the holiness and divinity of this month, later the dates of Vaishakh month were associated with the opening of doors of many deity temples and celebration of festivals in folk traditions.
This is the reason that the doors of Badrinath Dham, one of the four dhams of Hindu religion, open on Akshaya Tritiya of Vaishakh month. On the second day of Shukla Paksha of this Vaishakh, another Hindu pilgrimage Dham Puri also takes out the Rath Yatra of Lord Jagannath. Devvriksha Vat is worshiped on the new moon day of Vaishakh Krishna Paksha.

Vaishakh Purnima is celebrated as Buddha Purnima or the birthday of Gautama Buddha among Buddhists of South and Southeast Asia, Tibet and Mongolia.

Vaishakh Shukla Panchami is celebrated as the birthday of Adi Shankaracharya, the great philosopher and theologian of Hinduism.

Vaishakh Purnima known as 'Vaikasi Visakam' in Tamil Nadu is celebrated as the birthday of Lord Murugan. He is the eldest son of Lord Shiva.