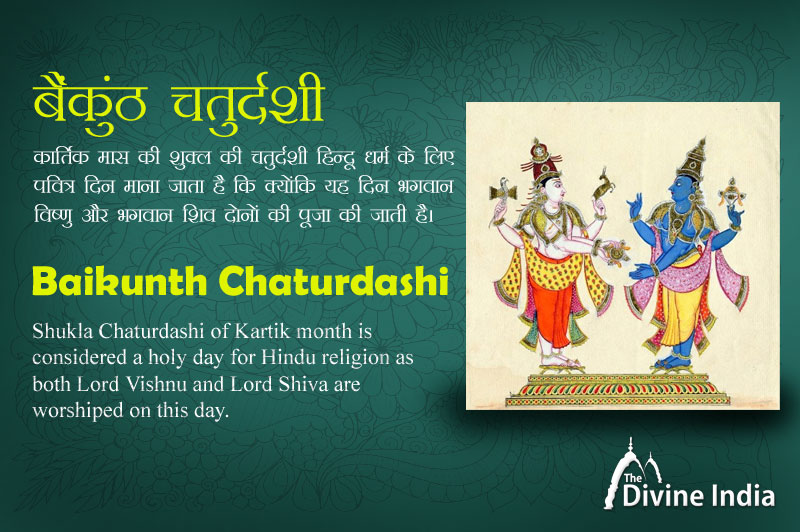 On the day of Vaikuntha Chaturdashi of Shukla Paksha of Kartik month, Vishnu Sahasranama, a devotee of Lord Vishnu, offers 1000 lotus to him while reciting thousand names of Vishnu. This day is also celebrated by Vishnu devotees as Kartik Snan. This day is celebrated as Deep Daan Festival in Rishikesh on the banks of the Ganges, to awaken Lord Vishnu from a deep sleep. In the evening, lamps are lit in the holy river Ganges. It is accompanied by many cultural festivals.

This day is considered as the festival of Lord Vishnu attaining Sudarshan Chakra. Considering this day as a symbol of achievement in the Kamleshwar temple of Uttarakhand, Srinagar, even today, devotees come to the temple every year to do sadhna on this festival at night with the desire to get a son. So many devotees come to this temple with a sense of darshan and salvation. Due to which this fair has taken the form of a special religious fair in the Garhwal region of Uttarakhand.

Kamleshwar Temple located in Srinagar, Uttarakhand is one of the mythological temples. It has great religious significance, legend has it that this place has also been the city of gods. In this pagoda, Lord Vishnu did penance and obtained Sudarshan-Chakra, then after killing Ravana, Shri Ram pleased Shiva by offering a wish to get rid of the sin of killing Brahma and became free from sin. Vaikund Chaturdashi fair is organized in Srinagar, Uttarakhand on this occasion.

Its type is celebrated in Maharashtra by the Marathas according to the custom set by Shivaji and his mother Jijabai for the occasion and by the Gaur Saraswat Brahmins.

Once Naradji went to Lord Vishnu in Baikunth. Vishnuji asked Nadarji the reason for coming. Naradji said, "O Lord, you are called by the earthly grace, but from this only you get the status of your dear devotee. Ordinary male not female. Therefore, please suggest such a remedy by which even ordinary men and women become eligible for your grace." On this Lord Vishnu said, 'O Narada! On Kartik Shukla Chaturdashi, men and women who worship me with devotion while observing fast will attain heaven. After this Lord Vishnu called Jai-Vijay and ordered that the gates of heaven should be kept open on Kartik Shukla Chaturdashi. God also told that on this day a person who worships by taking my name even in the slightest, he will get Baikunth Dham.