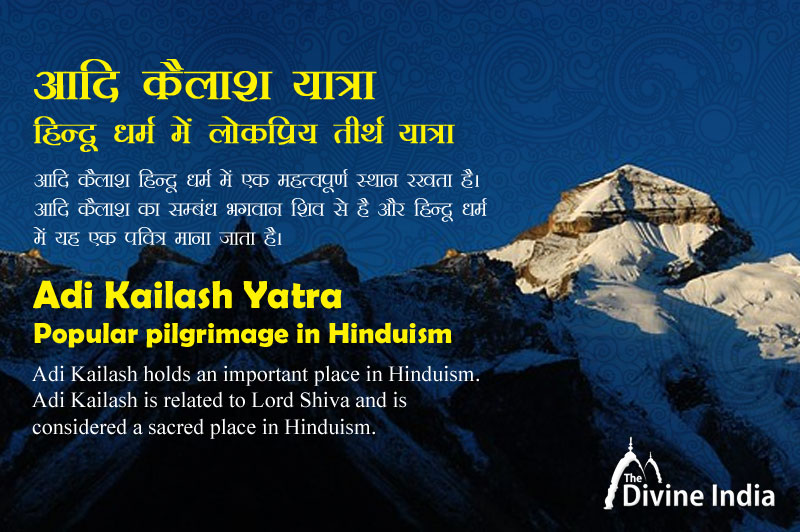 It is said that those who cannot see Mount Kailash located in Tibet can get the blessings and blessings of Lord Shiva by visiting Adi Kailash.

The journey to Adi Kailash is considered a popular pilgrimage in Hinduism. Like Kailash situated in Tibet, it is also a lake. The temple of Lord Shiva and Mata Parvati is situated on the bank of the lake. Sadhus and ascetics have been doing this holy journey since ancient times. The journey to Adi Kailash is completed in about 12-14 days, which is done by foot. If one is unable to travel on foot, one can also travel by riding on a horse. The Parvati Lake, Shiva Temple and the ancient pilgrimage site of Gaurichak are also visited during the Yatra.

Adi Kailash Yatra is considered to be the most difficult journey. Which has to be completed in about 12 days. Starting point of Adi Kailash Yatra The starting point of the trek is Lakhanpur, which is situated at a distance of 50 kms from Dharchula. After starting the trek from Lakhanpur, proceed through Lamri, Budhi, Nabhi, Nampha, Kutti, Jeolingkong, Nabidhang, Om Parvat and Kalapani, which then joins with the Darma Valley through the Shin La Pass. During Adi-Kailash Trekking, tourists can see the snow peaks of Annapurna, the vast Kali River, dense forests, Narayan Ashram full of wild flowers and a rare variety of fruits and waterfalls.

Apart from this, the trek to Adi-Kailash also takes trekkers to the famous Kali Temple in Kalapani which is a very auspicious place. In addition, Suchuma Adi Kailash has a miraculous stream that flows every three days and runs in a continuous cycle for three days throughout the year. Achari Tal, Parvati Sarovar and Gauri Kund are some of the very auspicious and pristine water bodies in these areas which can be visited during the visit.