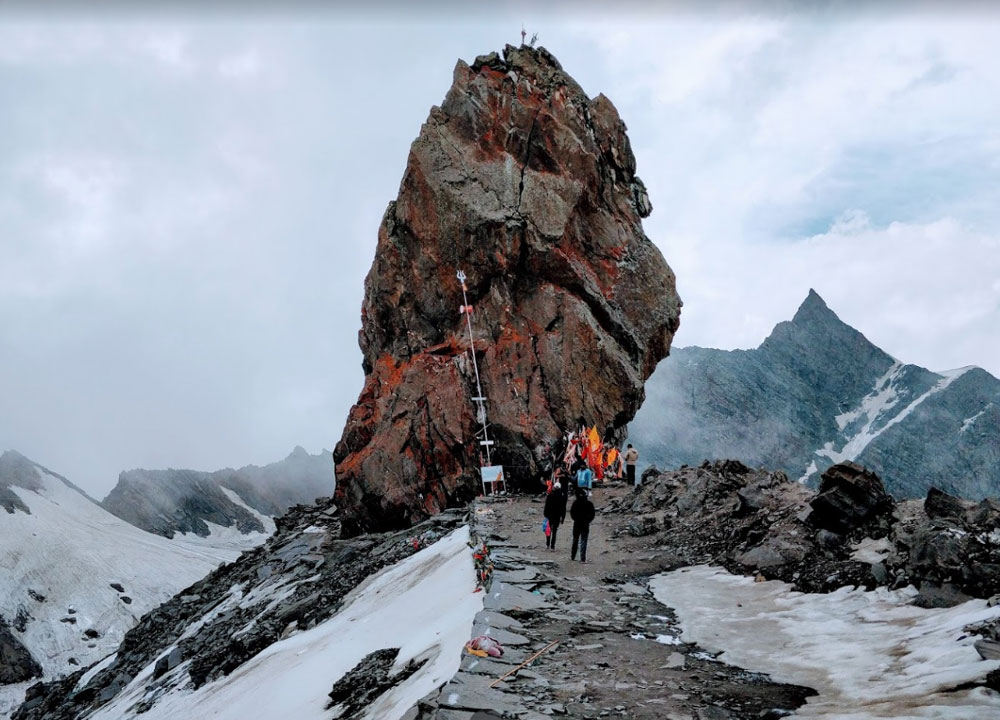 The Shrikhand Mahadev Kailash Yatra starts from the base village of Jaun in Himachal Pradesh, which is about 32 km walk to the top of Shrikhand. The whole route of this journey is quite dangerous. This is why this journey is considered tougher than the Amarnath Yatra. Only devotees above 15 years of age can travel in this journey.

During the Shrikhand Mahadev Yatra, many religious places and Dev Sthan are visited. Statues of Goddess Parvati, Lord Ganesha and Swami Karthik are also established about 50 meters before the visit of Shrikhand Mahdava. On the way, there are natural Shiva Caves, seven temples in Nirmand, nine goddesses including Mata Parvati in Javas, Parashurama Temple, Dakshineswar Mahadev, Hanuman Temple Arsu, Sinhagad, Jotkali, Dhankdwar, Bakasur Badh, Dhankdwar and Kunsha are religious places.

According to the legend, there was a demon named Bhasmasura. He received a boon from Lord Shiva by rigorous penance that anyone he laid his hands on would be consumed. Then he got sinned and thought about marrying Goddess Parvati and wanted to destroy them by placing his hands on Lord Shiva. Lord Vishnu, taking the form of Mohini, persuaded Bhasmasura to dance with him. While dancing, Bhasmasura laid his hands on his own head and he was consumed. For this reason, even today the soil and water here appear red.

The journey starts from Jaun, and after walking 3 km, reach Singhad, here is the first base camp, where food and other services are provided to the pilgrims. After that there is a 12 km steep climb up to Thachuru, which is also known as Dandi-Dhar.

Thakuru is another base camp after Thakuru, where food and tents are provided. The journey starts with a 3 km climb to Kalighati, which is believed to be the abode of Goddess Kali. If the weather is clear, then Shrikhand Mahadev Shivling can be seen from this place. There is a 1 km downhill stretch from Kalighati towards Bhima Talai.

Departing from Bhima Talai, reach the Kunsa Valley, after another distance of 3 km from here, the next base camp is Bhim Dawar, where all general services are available. Just 2 km ahead is another base camp - Parvati Bagh, this garden is believed to have been planted by Mata Parvati. The garden has flowers like Brahma Kamal, also known as Saussurea obvallata.

It is believed that this is the place where elephant head was placed on Lord Ganesha. 2 km from there, the next place is Nain Sarvor. After this, reaching the height of about 3 km, through rocky areas, reach Shrikhand Mahadev.