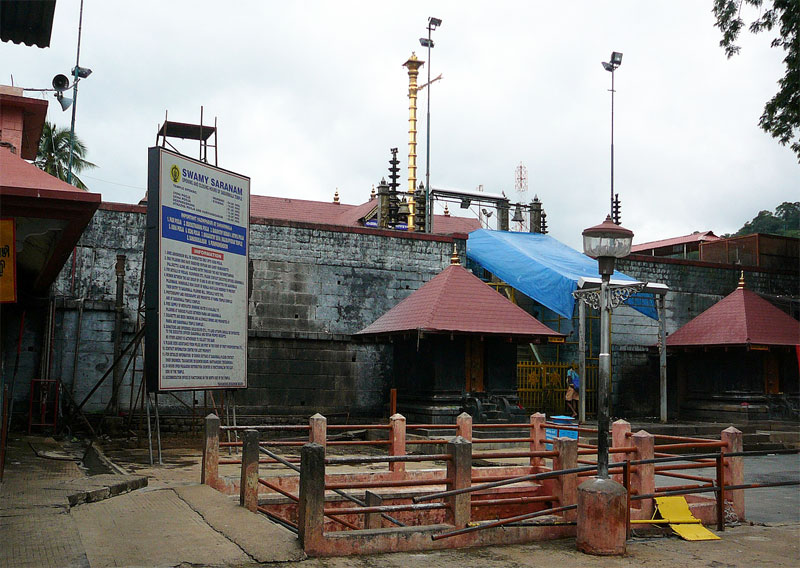 There are restrictions on the entry of women in the age group of 10 to 50 years in the shrine (order by Kerala High Court 1991). Supreme Court is referring to the constitution large bench so that decisions about the ban can be taken.

Sabarimala is a Hindu pilgrimage which is one of the second largest annual pilgrimage in the world, where about 45-50 lakh pilgrims come every year. It is the pilgrimage site of the Hindus, which is located in the Western Ghat mountain range of Periyarad Gram Panchayat of Periyar Tiger Reserve, Kerala's Patamthitta district. Temples are present in the hills all around Sabarimala whereas in many places in the surrounding areas there are functional and unstable temples, such as Nilakal, Kalkati, and Purana temples and Karimala remains still on the remaining hills.

It is an ancient temple of Ayyappan situated in the middle of 18 hills. This temple is also called the Sasta and the Dharmasasta. This temple is located on the edge of the hill at a height of 1260 meters above sea level, surrounded by mountains and dense forests. Dense forest (Periyar Tiger Reserve), known as the Pongavanam around the temple, is an ancient temple of temple Ayyappan in Sabarimala which is also called Sasta and Dharamsata. In the 12th century, Manikandan, a prince of the Pandalam dynasty, paid attention to the Sabarimala temple and became divine. Manikandan was the incarnation of Ayyappan.

Sabarimala is mainly associated with pilgrimage by Hindus. Pilgrims of Sabarimala can easily be identified, because they wear black or blue clothes. They do not shave until the completion of the pilgrimage, and paste the vibhuti or sandalwood on their foreheads.

The temple opens for all classes, this temple welcomes all caste, creed or religion, but There are restrictions on the entry of women in the age group of 10 to 50 years in the shrine. There is a place near the temple which is in front of Sannishanam, which is dedicated to Vavar (a Sufi and friend of Lord Ayyappa), which is called 'Vavarunada', symbolizes religious harmony. The most unique thing of this temple is not open all year, it is only in the days of Mandalpuja (about 15 November to 26 December), Makarvilakku or 'Makar Sankranti' (January 14) and Mahavishnu Sankranti (April 14) Only open for worship. It is said that pilgrims have to fast for 41 days to clean their mind before going to Sabarimala. During the journey, the pilgrims have to wear a special garland which is made of Rudraksha or Tulsi. There are some strict rules on this journey which are mandatory to follow such as vegetarian diet, adhering to the Brahmacharya, not taking intoxicants, not cutting hair and nails, doing maximum to help others, in one day Will bath two times and will go regularly in local temples and wear only traditional black or blue clothes. Saffron colorful clothes are worn by Saints. Travel is taken through the difficult road of the forest because vehicles can only go up to Pampa.

In 1991, the Kerala High Court barred the entry of women under the age of 10 and women below the age of 50 in Sabarimala, because they were of the age of menstruation. At present, the Supreme Court of India has made a petition to review the High Court's decision and allow women to enter. By October 2017, the Supreme Court is referring to the constitution large bench so that decisions about the ban can be taken.