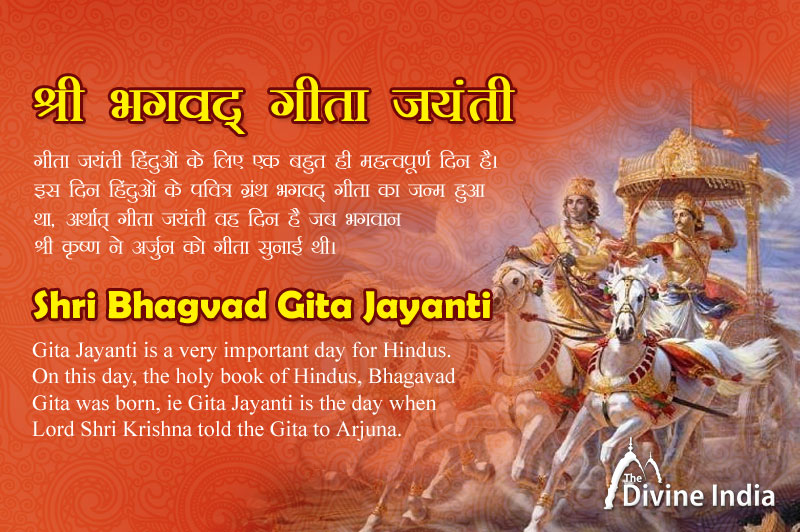 Gita Jayanti is a very important day for Hindus. On this day, the holy book of Hindus, Bhagavad Gita was born, ie Gita Jayanti is the day when Lord Shri Krishna told the Gita to Arjuna. It is celebrated on Shukla Ekadashi on the 11th day of Margashirsha month of the Hindu calendar. The Bhagavad Gita was described by Lord Krishna himself before the Mahabharata war began. It is believed that in the Mahabharata, the seeds of the Pandavas and the Kauravas had decided to go to war even after every possible reconciliation effort.

The 'Bhagavad Gita' was revealed by Krishna himself to Arjuna at the battlefield of Kurukshetra. Now this place is called Kurukshetra in the Indian state of Haryana. Kurukshetra is the holy and main religious place of Hindus. This book is written by a third person. Which was narrated by Sanjay to King Dhritarashtra, because the Gita was described between Lord Krishna and Arjuna. Sanjay was blessed and empowered by his teacher, Ved Vyas, that he could see the events in the battlefield from a distance.

Most people also fast on this day because it is the day of Ekadashi (Ekadashi fasting is the eleventh day of the moon and Amavasya) - it occurs twice every lunar month. On this day, bhajans and pujas are organized. In places where this festival is celebrated grandly, stage play and Gita chanting competitions are organized to show children as a way to encourage their interest to read Gita. Yogis, monks and learned scholars give talks and organize this sacred book. Letters, booklets and books containing the essence of the Gita are distributed to the public. Distributing free copies of the Gita on this holy day is particularly auspicious.

All the 18 chapter name of Bhagavad Gita are as follows: