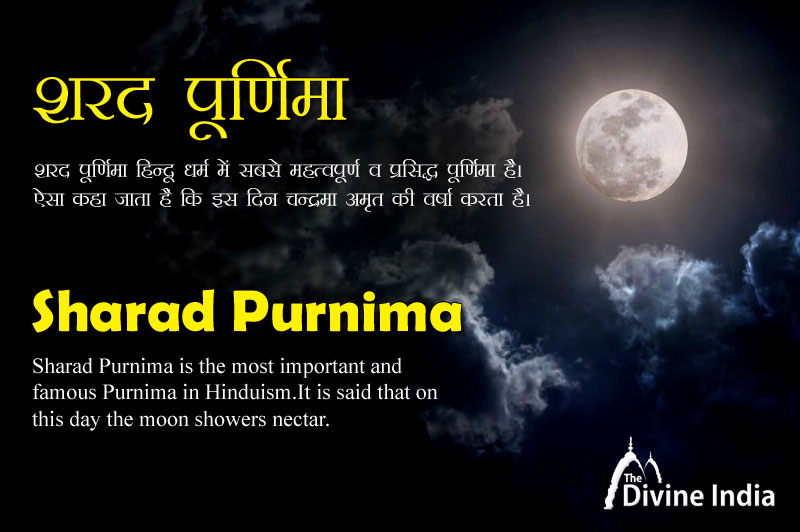 On the day of Sharad Purnima, make Kheer, Puri and offer it to God in the evening. After offering bhog, keep the kheer on the terrace and worship God at night. Throw the needle in the light of the moon. The prasad of Kheer should be given to everyone the next day.

On this day in the morning, adorn the adorable deity with beautiful clothes and ornaments. Sitting on the seat, worship should be done with scent, akshat, flowers, incense, lamp, naivedya, tambul, betel nut, dakshina etc.

Newly Married Women Newly married women, who take a vow to observe Poornimasi fast for the year, start fasting from the day of Sharad Purnima.

In Brij Kshetra, Sharad Purnima is also known as Ras Purnima (Ras Purnima). It is believed that on the day of Sharad Purnima, Lord Krishna performed Maha-Raas, the dance of divine love. On the night of Sharad Purnima, hearing the divine music of Krishna's flute, the gopis of Vrindavan, away from their homes and families, went into the forest to dance with Krishna all night long. This was the day when Lord Krishna made many Krishnas with each gopi. It is believed that Lord Krishna supernaturally extended the night of Lord Brahma to the length of one night which was equal to billions of human years.

A moneylender had two daughters. Both the daughters used to observe full moon fast. But the eldest daughter used to fast for the full moon and the younger daughter used to observe incomplete fast. The result was that the child of the younger daughter died as soon as she was born. When he asked the pundits the reason for this, they told him that you keep an incomplete fast of Purnima, due to which your children die as soon as they are born. By observing full moon fasting methodically, your children can survive.

On the advice of the pundits, he performed the full full moon fasting methodically. He had a son but died soon after. He made the boy lie on his back and covered the cloth from above. Then the elder sister was called and brought and gave the same pain to sit. When the elder sister started sitting on the pedestal, her ghagra touched the child. The child started crying as soon as he touched the ghagra. The elder sister said - 'You wanted to tarnish me. It would have died if I sat down.' Then the younger sister said, 'It was already dead. It is because of your luck that it has come alive. It is because of your virtue that it has come to life.'

After that, in the city, he made a ruckus to observe full full moon fast.