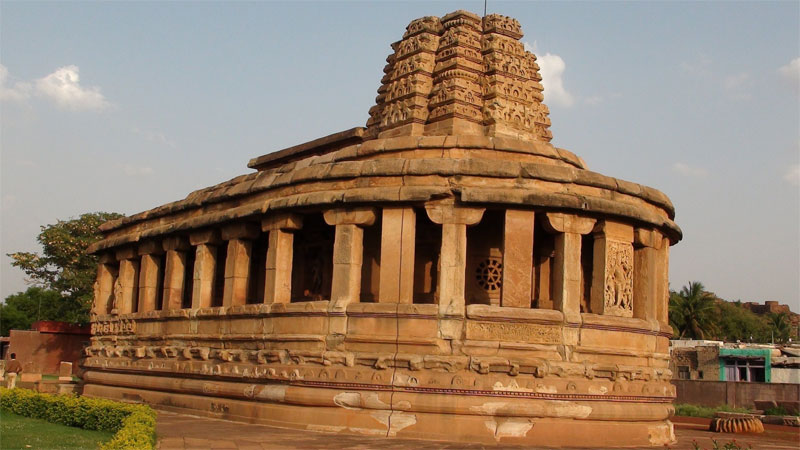 Durga Mandir is a Hindu temple which is of medieval age. Durga Temple is located in Aihole, Karnataka, India. This temple is part of the UNESCO World Heritage pending List. 14 kilometers away from Badami, Aihole is another historic site in Karnataka, where there are beautiful ancient temples situated along the Malaprabha river. Sri Durga Temple is one of the famous temples of Ihol. Durga Mandir is not used for regular rituals and worship. In reality, there is no idol of Goddess Durga in this Durga temple, and neither Durga is worshiped. This is a fort named Durga. Durga means the protector or the fort here.

Durga Temple was built by the descendants of Chalukya between 7th and 8th centuries. The architecture of the temple is mainly used in some areas of Nagra and Dravid style. Durga Temple is related to the Chalukya period. This temple was probably a part of the fortification of the Marathas.

Durga Temple is dedicated to Vishnu or Shiva because Vishnu's representation is as many as Shiva. The most basic feature of the temple is a peristyle roaming around the temple and statues of various Hindu deities are kept on the walls of the temple. Due to which the temple looks very beautiful and amazing.

On the entrance of the temple, there are two stairs which reach the porch of the temple. The walls and pillars of the porch are decorated with statues of the Hindu Goddesses. Through this porch, the temple can be entered in the center heart.

The shape of the temple, in Indian traditional architecture, is known as Gajaprasta, which means equality to the back of an elephants. The extraordinary episode form of the temple is considered to be a copy of the first Buddhist Chaitya Hall, but later the study established that the design of the pan-Indian tradition in the Indian architecture was in practice even before Buddhist architecture. There is a tower in the womb of the temple, which announces future high tower shikharas and vimanas.

Other Durga Mata Temples of Karnataka