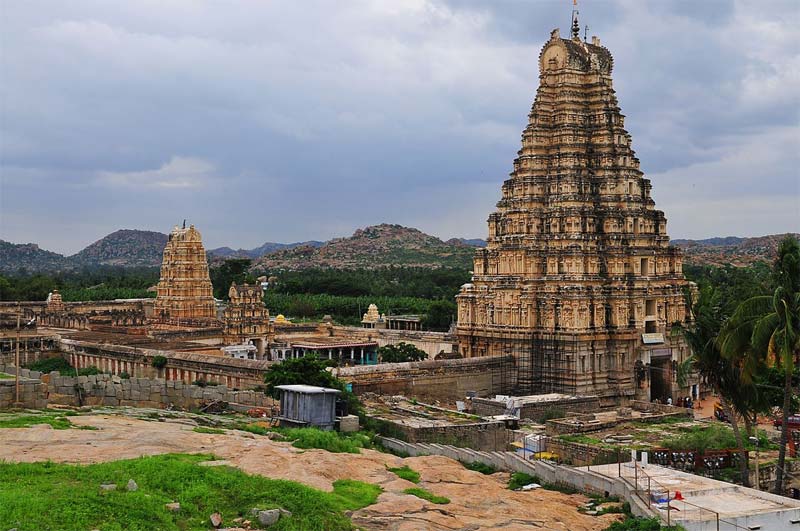 Virupaksh temple is one of the famous historical temples of India and its history is related to the famous Vijaynagar Empire. The temple is located in Hampi, 350 km from Bangalore, in the state of Karnataka in southern India. The temple included in the group of monuments located in the main part of the group of historic monuments of Hampi, particularly Pattadakal. Also is a part of designated a UNESCO World Heritage Site. The temple is dedicated to Lord Virupaksh and his wife, Goddess Pampa. Lord Virupaksh is another form of Lord Shiva. There are many small temples dedicated to other Gods and Goddesses near the temple. There is also a Virupakshini Amma temple (mother goddess) in a village called Nalagamapalle, Chittoor district, Andhra Pradesh, approximately 100 km from Tirupati.

The temple is located on the edge of Tungabhadra River in the capital of Vijaynagar Empire, Hampi.  Virupaksh temple, the main center of pilgrimage in Hampi, and is considered the most sacred sanctuary for centuries. It is intact among the surrounding ruins and is still used in worship of Lord Shiva.

Virupaksh temple was built by the Queen Locommahdevi of Vikramaditya. The temple was built by the queen for the king Vikramaditya to win over against the king of Pallava of Kanchipuam. The nine-tiered eastern gateway, 50 meters high, Gopuram temple is located at the foot of Hemkut hill on the southern bank of river Tungabhadra. It has a brick superstructure and a stone base and reflects South Indian Dravidian architectural style.

It is believed that the main pillared hall which is the most adorned structure of this temple is his addition. Krishnadevaraya also built a mandapam in front of the sanctum. In 1509 he built Gopudha temple at the time of his consecration.

The peak of the temple is 50 meters high above the ground level. Inside this spacious temple there are many small temples, which are older than it.  The temple is also known as' Panpapti temple ', and is at the bottom of Hemkuta hills.

It is believed that Lord Vishnu took the place deemed a bit too big for his stay and return home. Lord Shiva’s underground temple is also in the temple. Large part of the temple is covered in water, so no one is allowed to go inside. The temperature of this part is low as compared to the outer temple. 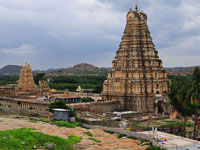 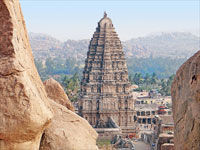