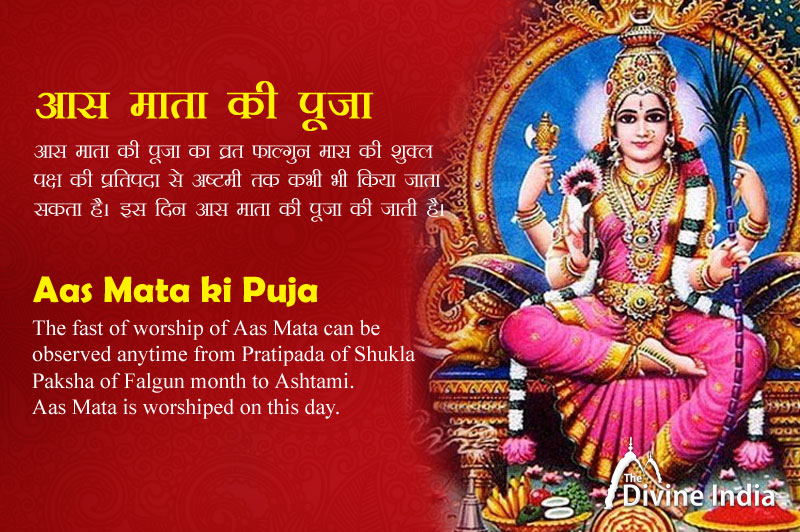 The fast of worship of Aas Mata can be observed anytime from Pratipada of Shukla Paksha of Falgun month to Ashtami. Aas Mata is worshiped on this day. It is said that by observing this fast all the wishes are fulfilled. This fast is performed by women.

On the day of fast, keep a lot of water on a wooden track. Make a swastika symbol on the lota and offer rice. Take seven grains of wheat in hand and listen to the story. After keeping the pudding, poori and money, take out the Bayana and give it to the mother-in-law by touching her feet.

There was a man named Asalia Bavaliya. He was fond of gambling. Along with this he used to feed Brahmins. Because of this habit of his, his sisters-in-law threw him out of the house.

He wandered and reached a city. He took the name of Asmata and sat down at one place. He got it publicized in the city by the nearby men that a high-ranking gambler had come.

This matter even reached the king. The king invited him to gamble. The king lost everything in gambling. Asaliya defeated the Bavaliya king in gambling and became the king himself.

Here there was a food famine at Asaliya Bavaliya's house. When the family members came to know that their brother had defeated the king and became the king himself, then his brother-in-law and mother went to the city to see him.

Tears welled up in the eyes of the mother seeing her son become the king. The king touched his mother's feet. Then his mother told him that "I will do the Ujman of Aas Mata".

Then all the people went home and did Ujmana of Aas Mata. After that Asalia Bavaliya started ruling happily.

Oh Aas Mata! Just as you gave the palace to Asalia Bavaliya, in the same way fulfill everyone's wishes.