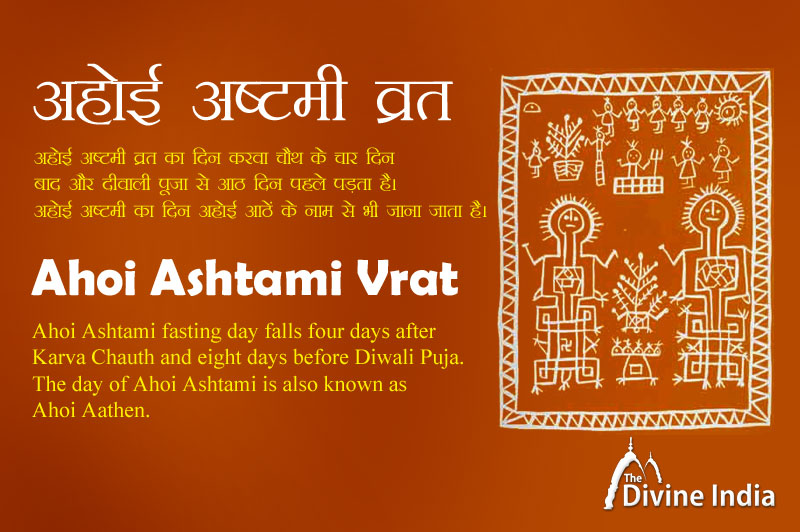 This fast is usually observed on the same day of Kartik Ashtami as the day of Diwali. On this day, for the attainment of health and longevity for their children, the picture of Ahoi Mata is worshiped by hanging it on the wall.

How to worship Ahoi Ashtami?

This fast is done on Ashtami as soon as Kartik starts. The day of which Deepawali falls, Ahoi Eights also falls on the same day. This fast is observed by those women who have children. Mothers of children keep fast throughout the day. Make an effigy of Ahoi on the wall in the evening by filling it with color. Make a picture of Sei (Syau) and Sei's children near that effigy and worship it after sunset i.e. before worshiping Ahoi Mata after the stars come out, after completing the check, fill a lot of water and put the urn on a plate. Keep worshiping like this. Mothers listen to the story by worshiping Ahoi Mata.

For worship, the mothers should make a silver Ahoi in advance, which is called Syau, and in it two silver grains, like a pendant is attached to a necklace to wear around the neck, in the same way, cast silver Ahoi and put silver grains in the string. Take it Then take out Ahoi's roli, rice, milk and rice pudding, and take out the money and listen to the story with seven grains of wheat. After listening to the story, wear the garland of Ahoi Sayu around the neck. Touch the feet of mother-in-law and give it to her with respect. After this, offer food to the moon and eat it yourself. After Diwali, on an auspicious day, remove Ahoi from the neck and offer it with jaggery and sprinkle water and keep the head bowed. As many sons as there are and the sons who have been married, two or two grains of silver should be put in the Ahoi. By doing this, Ahoi Mata is pleased and keeps doing new good things in the house by giving long life to the children. Donating petha to the pundits on this day gives auspicious results.

A woman who has a son or a son is married, then she should perform Ujman of Ahoi Mata. Place four or four puris in seven places in a plate and place some pudding on them. Along with this, placing a teal sari blouse on it according to the capacity, put the money around the plate and give all the goods to the mother-in-law, reverently placing her feet on the mother-in-law. Keep teal and rupees mother-in-law on you and distribute the pudding after completing the pudding. Bayana should also be sent to sister-daughter's place.

In ancient times there was a moneylender who had seven sons and seven daughters-in-law. There was also a daughter of this moneylender who had come from her in-laws' house on the occasion of Deepawali. On Diwali, the seven daughters-in-law went to the forest to bring soil to cover the house, then the sister-in-law also went towards the forest with them. Syahu (porcupine) used to live with her sons at the same place where the moneylender's daughter was taking the soil. While digging, the moneylender's daughter accidentally killed a child of ink with a shovel. Syahu got angry on this and said I will tie your womb.

Hearing this, the moneylender's daughter pleads one by one to her seven sisters-in-law to get her womb tied up instead. The youngest sister-in-law agrees to have her womb tied in exchange for her sister-in-law. After this, all the children of the younger sister-in-law, all die after seven days. After the death of seven sons in this way, he called the Pandit and asked the reason for it. The pundit advised to serve the surhi cow.

How to worship Ahoi Athe?

Why is Ahoi Ashtami fasted?

On this day, for the attainment of health and longevity for their children, the picture of Ahoi Mata is worshiped by hanging it on the wall.