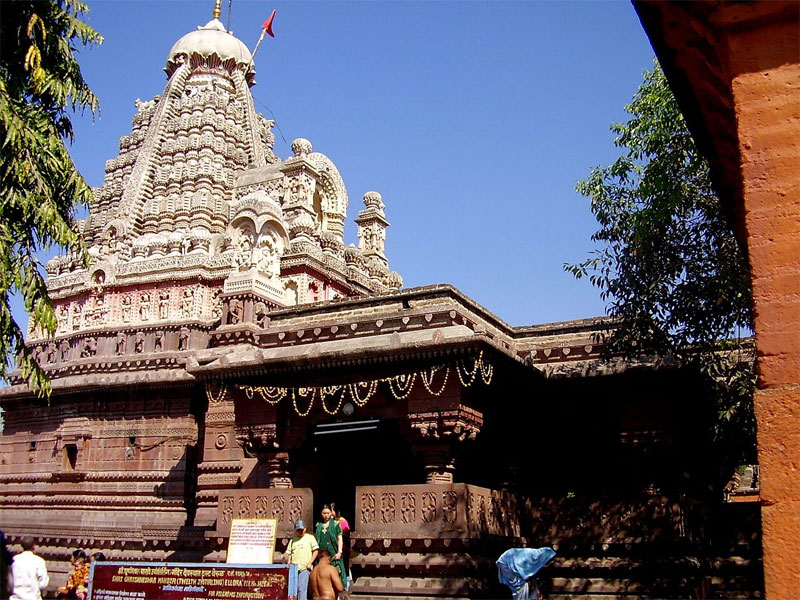 The temple was destroyed during the Hindu and Muslim wars during the 13th and 14th centuries by the Delhi Sultanate. During the Mughal-Maratha struggle, Grishneshwar Temple was destroyed and reconstructed several times. In the 16th century Maloji Bhosale of Verrol (Shivaji's grandfather) again built the temple. The reconstruction of the present temple was done in the 18th century after the fall of the Mughal Empire, under the sponsorship of Hindu Rani Ahilyabai of Indore.

The temple of Grishneshwar is an example of architectural style and structure of the South Indian temples. The temple was made of red stones and made up of a five-level Shakara. This temple is the smallest Jyotirling temple in India. A court hall has been built on 24 pillars.

According to legend A Brahmin named Sudharma lived with his wife, Sudeha, near the Devgiri Mountain of South India. Both of them were great devotees of Shiva, but they were worried about not having children. At the request of the his wife, he married to his sister-in-law Ghushma, who was also great devotee of Lord Shiva. By the grace of Lord Shiva, Ghushma received a healthy son. Slowly, Sudeha began to be jealous of the fact that she also took possessed of her husband. Children also belong to him. This maladroity gradually started growing in his mind. Even here, the child was born. Gradually he became young and he got married too. Sudeha killed the son of Ghushma after getting the opportunity. Sudharma and his daughter-in-law, both of them, started crying. But intrusive mind is absorbed in the worship of Lord Shiva. Just like nothing happened. After the end of the worship, She always walked in the pond to leave the Parthiv Shivlings in the pond like that. At the time when she started returning from the pond, her cute son was seen coming out from inside. As usual, he fell down at the feet of his mother. The child got alive with the grace of Lord Shiva. Lord Shiva blessed that place on the request of Ghushma, and Lord Shiva began to abode in that place and later became famous as the name of Grishneshwar. The name of that lake has also been converted into a pagoda.

Blog/Spiritual science
Rules for after meals