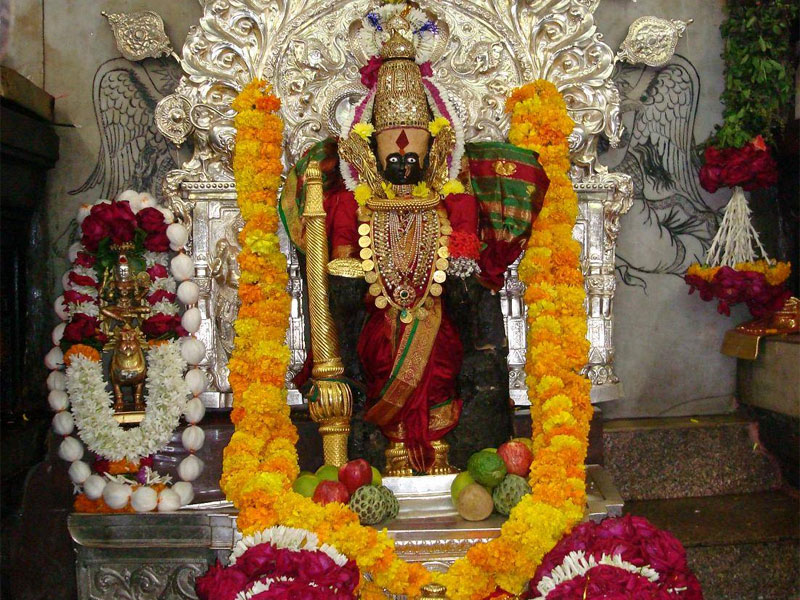 Kolhapur is also known as the city of ancient temples. This place is located at the confluence of five rivers, which are called Panchganga Rivers. Karveer Devi Temple is the most important temple of the Kolhapur; There are also statues of three powers at this place. There are many temples in this place, like Vishveshwara Temple, Vyankatesh, Katyayani and Gorishankar and temple complexes have statues of many deities. Details of the area of ??Karveer is also found in Puranas. This mention in Devigita is as follows.

According to mythology, Devi Sati gave her life by jumping into the fire of Havan organised by her father King Daksheshwara. When Lord Shiva was running around the earth carrying her body then Lord Vishnu divided the body in 51 parts using his Sudarshan chakra. Out of those 51 parts, from which the third eye of Sati fell to this place.

It is believed that according to the 'Karveer region Mahaatmya' and 'Lakshmi Vijay', the Kaushalusa giant was blessed. That he can be killed only by a woman, So, Vishnu himself  take avatar in form of Mahalaxmi; and defeated monster in war at Karveer by becoming Prakriti and Sinharru in the form of Mahalaxmi. Before the death of demon, Demon appealed to the Goddess Mahalakshmi that, this place name, put on the name the monster karveer. The goddess gave bless the monster and herself also started living here. Then it started to be called 'Karveer Area'. Which later became 'Kolhapur'. Mother began to be called KolaSura Mardini.

According to Padmapura, this area 108 is ancient and it is called Mahamatruka, because it is the main seat of Adishakti.

All the festivals are celebrated in the Karveer Temple, especially in the festival of Durga Puja and Navaratri special puja is organized. On this day, the temple is decorated with flowers and lights. The spiritual atmosphere of the temple provides peace to the heart and mind of the devotees.