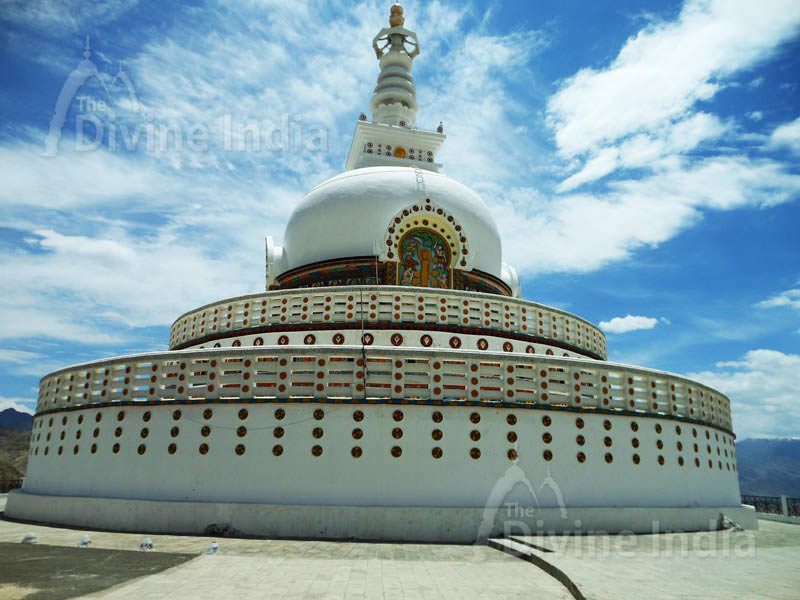 Shanti Stupa is situated on a hilltop in Chanspa, Leh district, Ladakh, in the north Indian state of Jammu and Kashmir. Shanti Stupa as know Buddhist white-domed stupa. It was built in 1991 by Japanese Buddhist Bhikshu Gyomyo Nakamura .The Shanti Stupa holds the relics of the Buddha at its base, enshrined by the 14th Dalai Lama himself. Shanti stupa has provides beautiful and panoramic view of the surrounding landscape. This has become a primary reason for Shanti Stupa to become a popular tourist attraction, apart from its religious significance.

The Shanti Stupa was built to promote world peace and prosperity and to commemorate 2500 years of Buddhism. It is considered a symbol of the ties between the people of Japan and Ladakh.

Situated at a height of 4,267 metres (13,999 ft), the stupa is located 5 kilometres (3.1 mi) from Leh - the former capital of Ladakh - on a steep hill facing the Leh Palace. The stupa can be reached by a drivable road or on foot using a series of 500 steep steps to the hilltop

The stupa is open for tourists between 5:00 a.m. and 9:00 p.m. Sunrise and sunset are considered to provide the best views from Shanti Stupa.

About the Shanti Stupa