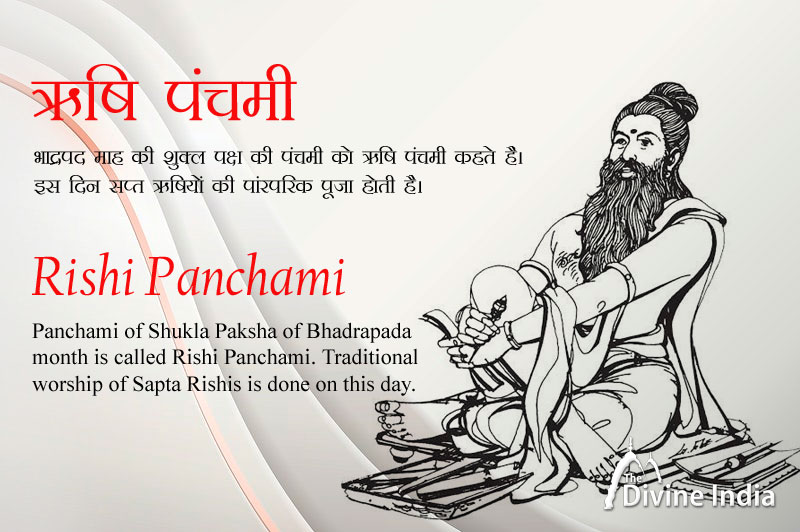 Rishi Panchami has its own importance in Hinduism. Rishi Panchami is celebrated as a festival in Hinduism. The festival of Rishipanchami is celebrated on the fifth day of Shukla Paksha in the month of Bhadrapada of the Hindu calendar. This festival takes place on the next day of Ganesh Chaturthi. This is the traditional worship of the Sapta Rishi, on this day reverence is expressed towards the Sapta Rishis. In this fast, people express their respect, gratitude and remembrance of the great deeds of those ancient sages who dedicated their lives for the welfare of the society.

The seven sages - Kashyapa, Atri, Bharadwaja, Vishwamitra, Gautam Maharishi, Jamadagni and Vashishtha. In some parts of Kerala, this day is also celebrated as Vishwakarma Puja.

By observing a fast on the day of Rishi Panchami, one gets freedom from sins committed knowingly or unknowingly. Taking a bath in the Ganges on this day also has significance.

Knowing this fast, both men and women should do it to cleanse the sins committed inadvertently. The fasting person should bathe in the Ganges River or any other river or pond. If this is not possible, then you should take a bath by mixing Ganga water in bathing water at home. Thereafter, after making an urn filled with mud or copper water, after leaving the cow dung, make Ashtadal Kamal. Listen to the story by worshiping Sapta Rishis including Arundhati and having food to the Brahmin and eat it yourself.

In the Vidarbha country there lived a virtuous Brahmin named Uttanka. His wife was a great husband, whose name was Susheela. The Brahmin had two children, a son and a daughter. When he was eligible for marriage, he married the girl with the same Kulshil groom. A few days later she became a widow by chance. The unhappy Brahmin couple started living as a hut on the Ganges along with the girl.

One day a Brahmin girl was sleeping that her body was filled with insects. Girl told the whole thing to her mother. Mother asked her husband to say everything - Prannath! What is the reason of this situation of my sadhvi daughter?

Uttanka discovered this incident by Samadhi and told him that this girl was a Brahmani even in her previous birth. She used to touch the utensils even when she was menstruating. Therefore, there are insects in its body.

It is believed by the scriptures that the woman of menstruation is impure like Chandalini on the first day, Brahmaghatini on the second day and Dhobin on the third day. She is purified by bathing on the fourth day. If even with this pure heart, then observe the fast of Rishi Panchami, then all its sorrows will go away and in the next life, you will get unalterable good fortune.

On the orders of the father, the daughter methodically worshiped and worshiped the sage Panchami. She got free from all sorrows due to the effect of the fast. In the next life, he got the enjoyment of inexhaustible pleasures including unalterable good fortune.