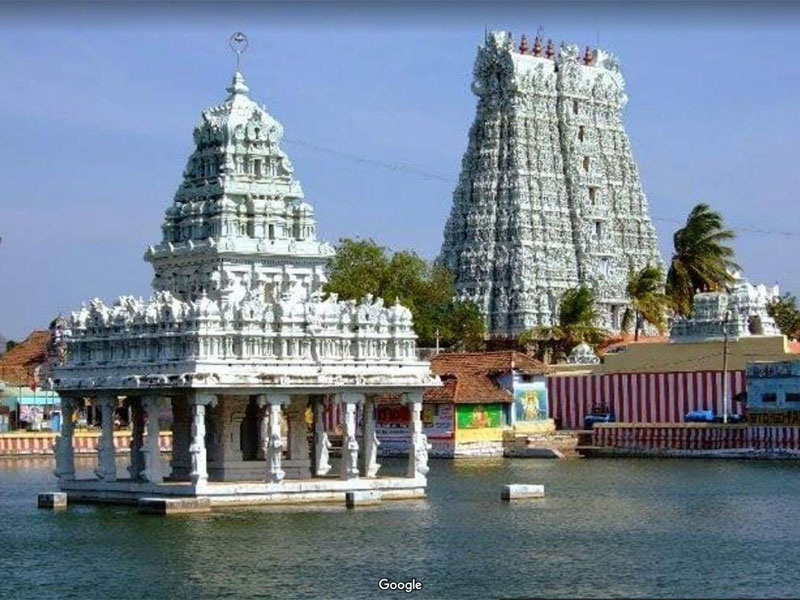 Suchindram Shaktipeeth is one of the major religious places for Hindus. This temple is located in the Indian state of Tamil Nadu, Kanyakumari. It is believed that the word 'suchi' is derived from Sanskrit language, which means 'to become pure'. Suchindram Shakti Peeth is also called ‘Thanumalayan’ or Sthanumalayan Temple.
This temple is of seven storages, with white gopurams visible from far away. This temple was built in the 17th century. Suchindram Shaktipeeth is famous for the idols of Hindu Goddesses-Gods made in the temple. The entrance to the temple is about 24 feet high, with beautiful carvings on the door. This temple attracts a large number of  Shaivaite and Vaishnavite. There are about 30 temples for various deities in the temple premises, in which the big lingam in the holy place, the statue of Vishnu in the adjacent temple and a huge statue of Hanuman on the eastern end of the North Corridor. This temple represents almost all the Goddesses-Gods of Hinduism.

Lord Shiva, Lord Vishnu and Lord Brahma, the chief goddess of the temple, is called Stanumalaya in the same form. Stanumalaya depicts three deities in which the word 'Stanu' means 'Shiva', 'Mal' means 'Vishnu' and 'Ayan' means 'Brahma'. One of the temples in India, in which the trimurtis and the three gods are worshiped in a temple.

This temple is one of the 51 Shaktipeeths of Mother. Shakti is worshiped as Narayani in this temple and Bhairav is worshiped as in the form of a Bhairav slaughter. According to the Puranas, wherever the pieces of the body of Sati, the clothes or ornaments held, have fallen, wherever Shaktipeeth came into being. They are called the most sacred shrines. These shrines are spread across the entire Indian subcontinent.

According to mythology, Devi Sati gave her life by jumping into the fire of Havan organised by her father King Daksheshwara. When Lord Shiva was running around the earth carrying her body then Lord Vishnu divided the body in 51 parts using his Sudarshan chakra. Out of those 51 parts, from which the ‘Uper Teeth’ of Sati fell to this place.

According to legend, Lord Indra of the Gods was freed on this place by the curse given by Maharishi Gautam.

All the festivals are celebrated in Suchindram Shaktipeeth, specially organized on special festivals of Shivratri, Durga Puja and Navaratri. But there are two major festivals, which are the center of the main attraction of this temple, 'Suchindram Margazhi festival' and 'Rath Yatra'. During these festivals, some people keep fasting (do not eat food) as a respect and dedication to God's worship. In the days of the festival, the temple is decorated with flowers and lights. The spiritual atmosphere of the temple provides peace to the heart and mind of the devotees.