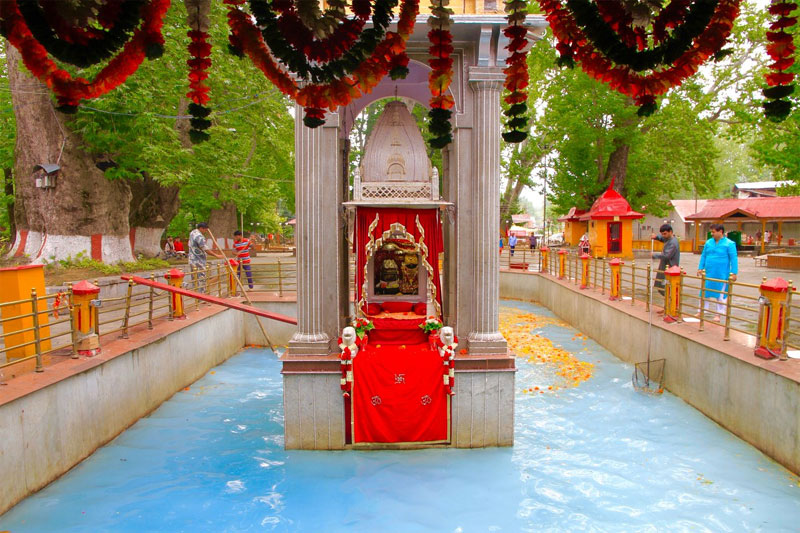 Kheer offerings are made to the Goddess in the Kheer Bhavani temple. Kheer is made from a mixture of rice and milk. Hence the name of this temple is associated with Kheer.

There is also a mythological story associated with the temple, it is believed that Kheer Devi resided in Ravana's city of Lanka and was pleased with Ravana's devotion. But Kheer Devi got angry because Ravana kidnapped Sita Mata, so mother did not want to live in Lanka. Mata then instructed Sri Ram Bhakta Hanuman to install her idol in Tulmool village. In Kashmir, Mata is worshiped as Tripurasundari and Vaishnav while in Sri Lanka it is called Shyama of the Goddess. It is believed that after Ravana worshiped the goddess, he offered her Kheer, which her accepted and has since been called Kheer Bhavani.

Maharagini is the form of Durga Bhagwati. Brahmins of Kashmir worship this waterfall and every visiting pilgrims of the country have darshan of this place. Swami Ram Tirtha and Swami Vivekananda also visited here.

The temple was rebuilt in 1920. Some people are of the opinion that there was a mulberry tree near the holy place of Kheer Bhavani, which in local language is called Tulla root. But the root word Tul is also derived from the Sanskrit word Incredible root which means great value. During the Navratri festival, devotees visit the temple in large numbers to visit the Goddess.