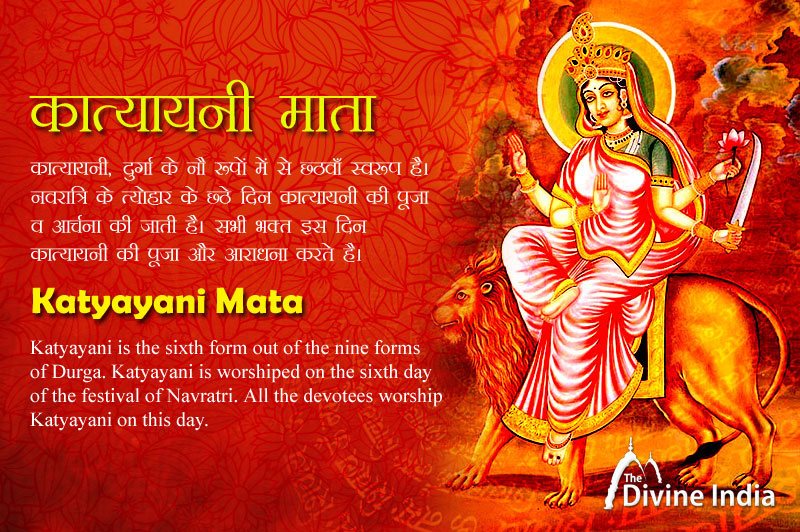 Katyayani is the sixth form out of the nine forms of Durga. Katyayani is worshiped on the sixth day of the festival of Navratri. All the devotees worship Katyayani on this day. 'Katyayani' is one of the many names of Mother Parvati. Other names of Mother Parvati are - Uma, Katyayani, Gauri, Kali, Hemavati and Ishwari etc. Mostly Katyayani Devi is seen as the slaying of the tyrannical demon Mahishasura. It is believed that Goddess Katyayani was worshiped by Goddess Sita, Goddess Radha and Goddess Rukmini for a good husband. On that day the mind of the seeker is situated in the 'Agya' chakra. This command chakra has a very important place in yoga practice.

In Shaktism, Mata Katyayani is referred to as a warrior goddess, Shakti or Durga, which also includes Bhadrakali and Chandika. Mother Katyayani is also traditionally associated with the color red like Goddess Durga. Mata Katyayani is depicted with four, eight and ten hands.

She is first mentioned in the Taittiriya Aranyaka of Yajurveda. It is mentioned in the Skanda Purana that Mata Katyayani was born out of the natural anger of the Supreme Lord and killed Mahishasura, mounted on a lion given by Goddess Parvati. Katyayani, the archetype of the goddess Shakti, is mentioned in Patanjali's Mahabhashya on Panini, composed in the 2nd century BC. She is described in the Devi Bhagavata Purana, and the Devi Mahatmya of the Markandeya Purana composed by the Markandeya sage, which was written in 400 to 500 AD. He is mentioned in Buddhist and Jain texts and many Tantric texts, notably the Kalika Purana.

By worshiping Goddess Katyayani, devotees easily attain the four fruits of Artha, Dharma, Kama and Moksha. She disease, grief, anguish and fear are destroyed. All the sins of births are also destroyed.

Meaning: Oh mother! The famous Ambe, who sits everywhere and is known as Shakti-Rupini, I bow to you again and again. Or I salute you repeatedly.

Apart from this, the girls whose marriage is getting delayed, they must worship Mother Katyayani on this day, due to which they get the desired groom.