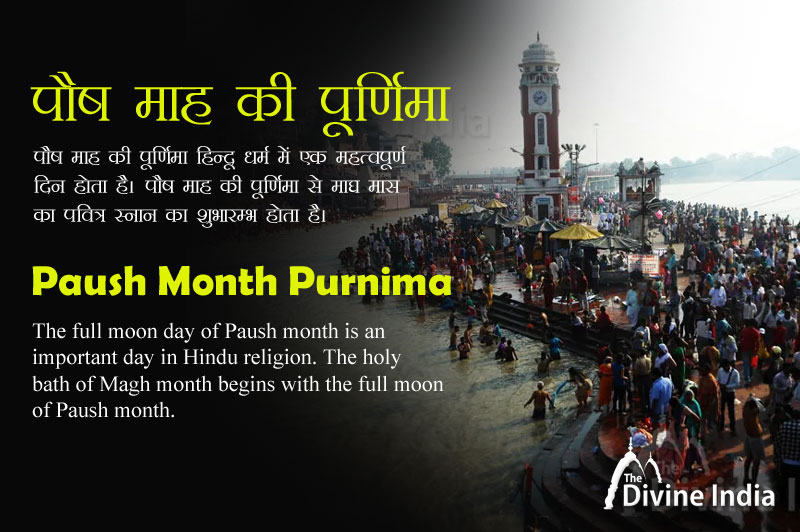 The full moon day of Paush month is an important day in Hindu religion. The holy bath of Magh month begins with the full moon of Paush month. This day is considered auspicious in North India. On this day thousands of people take holy bath in the Ganges and Yamuna rivers.

On the day of Paush Purnima, holy bath at 'Dashashwamedh Ghat' in Varanasi, 'Triveni Sangam' in Prayag, 'Har Ki Pauni' in Haridwar and 'Ram Ghat' in Ujjain is considered highly auspicious and important. It is believed that the holy dip on the auspicious day of Paush Purnima liberates the soul from the constant cycle of birth and death.

If a person cannot go to these pilgrimage places, then he can take a bath on this day before sunrise with the water of a river, pond, well, etc. could. After this Lord Vasudeva is worshipped. After the worship is over, after feeding the Brahmins, they send them away by giving donations. Lord Vasudeva is pleased with this.

Lord 'Satyanarayana' fast is also observed on the day of Paush Purnima and Lord Vishnu is worshiped with full devotion. After fasting for the whole day, the story of 'Satyanarayana' should be recited. Special prasad is prepared to offer to the deity. Finally an 'Aarti' is performed after which the Prasad is distributed among all. On the day of Paush Purnima, special 'Pushyabhishek Yatra' is celebrated in the temples of Lord Krishna all over India. Lectures on Ramayana and Bhagavad Gita are also organized on this day.

Donating on the day of Paush Purnima is also very auspicious. It is believed that donations made on this day easily bear fruit. Under 'Anna Daan' free food is served to the needy in temples and ashrams.

Taking a bath in the Ganges on this day gets rid of all sins and even attains 'Moksha'.

Shakambhari Jayanti is also celebrated during Paush Purnima. The followers of ISKCON and Vaishnava sect begin the Pushyabhishek Yatra on this day.