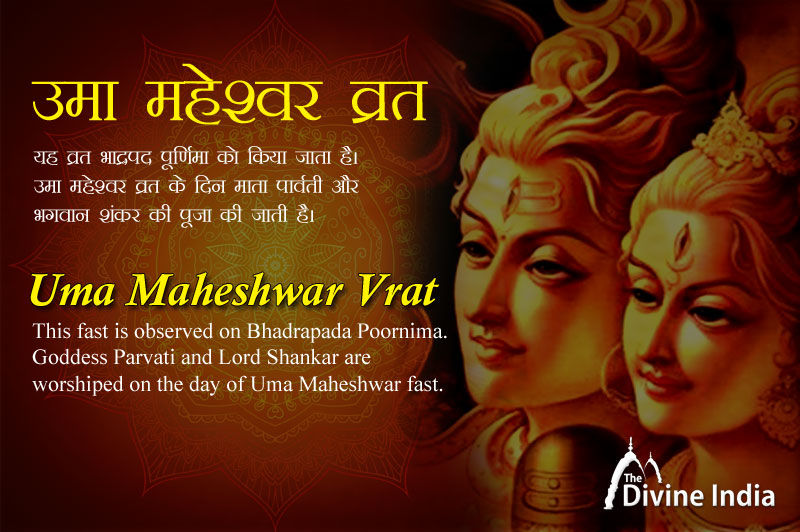 This fast is observed on the full moon date of Bhadrapada month. After taking a bath etc., the idol of Shiva should be bathed and worshiped with flowers, akshat, roli, dhoop, lamp, viplavatra, naivedya etc.

Jagran should be performed in any Shiva temple at night. Brahmins should be served food after retiring from worship of Uma Maheshwar etc. After that, they should end the Uma Maheshwar fast by giving alms as much as possible.

In the Matsya Purana, the law of Uma Maheshwar Vrat and its legislation has been given. It is said that once the sage Durvasa was returning after seeing Lord Shiva Shankar.

Lord Vishnu did not wear this garland around his neck and put his vehicle in the neck of Garuda. Seeing all this, Rishi Durvasa Ji considered it an insult and became very angry.

Rishi Durvasa said in an angry tone to Vishnu, you have insulted Mahadev Shiva Shankar. With this, you will leave Lakshmi ji and you will have to wash your hands from Baikuntha Lok as well as from Kshirsagar. Sheshnag ji will also not be able to help you.

Hearing this, Vishnu ji asked the way to get rid of this curse by folding hands in front of sage Durvasa ji. When the anger subsided, Rishi Durvasa Ji told Vishnu that he should observe Uma Maheshwar. Only then you will get the lost items back.

Then Vishnu ji observed this fast. Due to the effect of Uma Maheshwar Vrat, all the cursed things including Lakshmi ji were recovered by Lord Vishnu.