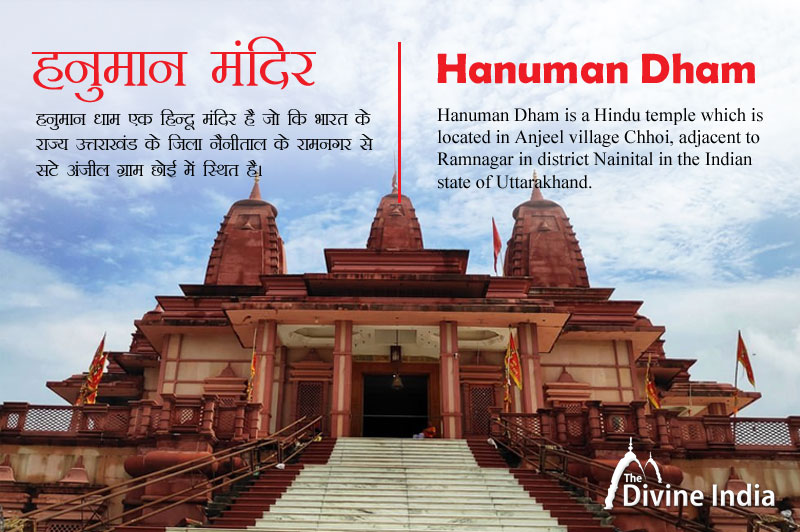 Hanuman Dham is a Hindu temple which is located in Anjeel village Chhoi, adjacent to Ramnagar in district Nainital in the Indian state of Uttarakhand. This temple is completely dedicated to Lord Hanuman ji. Hanuman Dham is situated in Ramnagar amidst peaceful and serene environment.

The construction work of Hanuman Dham temple started in 2011. The specialty of this temple is that Hanuman ji has 9 forms and 12 Leelas i.e. 21 forms in the temple premises, which have included this temple in Uttarakhand famous temples. There are 9 forms of Hanuman ji: Divine form, Child form with mother Anjani, Dasya form at the feet of Ramji, Ramamani Hanuman, Sankirtani Hanuman, Panchmukhi Hanuman, Sanjeevani Hanuman, The mighty Hanuman carrying Ram Lakshmana on his shoulders, Ram Sita in the heart Rammayi Hanuman .

Hanuman Dham is one of the most popular places in Ramnagar. The architecture of Shri Hanuman Dham in Ramnagar is splendid both internally and externally. This famous tourist attraction of Ramnagar has an arched entrance of the temple which depicts two fish at the entrance which is a symbol of luck and prosperity.

Hanuman Dham is the center of service and devotion under construction in Anjani village Choi, adjacent to Ramnagar in Nainital district. It is said that this temple is not only in India but the only such temple in the world, where together with nine forms of Bajrangbali, his twelve pastimes are seen. This Dham will be made the most beautiful Dham in the world.