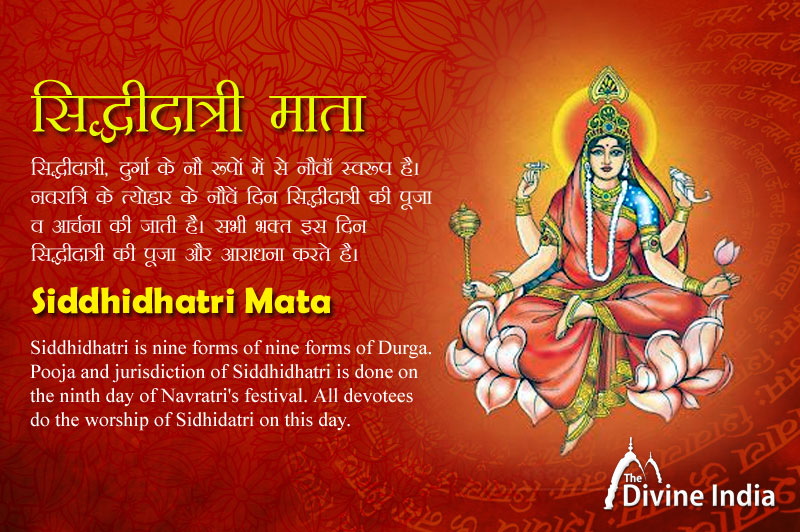 Siddhidhatri is nine forms of nine forms of Durga. Pooja and jurisdiction of Siddhidhatri is done on the ninth day of Navratri's festival. All devotees do the worship of Sidhidatri on this day. Siddhidhatri, mother Parvati is considered ninth incarnation. ‘Siddhi’ means the ‘ability to make supernatural power’ or ‘Dhatri’ and the meaning of giving ‘donor’ or ‘award’. On this day, the seeker who is practicing with classical law-legislation and full integrity, all the Siddhi gets achieved.

It is believed that a part of the body of Lord Shiva is of Goddess Siddhidatri. Therefore, he is also known as the name of ‘Ardhnarishwar’. According to Vedic scriptures, Lord Shiva had received all the siddhi by worshiping this goddess.

Siddhidatri, Mata Parvati is a basic form. On the right side of this goddess, the cycle in the bottom hand, in the top of the hand and on the left side, there is a lotus flower in the hand. They are vehicle lion and it is also on the lotus flower. This is the last goddess in Navratri. Her famous pilgrimage on Nandaparvat in Himachal Pradesh.

The literal meaning of 'Siddhi' - 'perfection', 'receipt', 'success' etc. According to Markandey Purana, Anima, Mahima, Garima, Laghima, Prapti, Prakambya, Ishitva and Vashitva - These are eight innovations. This number has been described in the Shrikrishna Birth section of Brahmova Purana.

Siddhidatri Mata has eight supernatural powers or the siddhis, which are called Anima, Mahima, Garima, Laghima, Prapti, Prakambya, Ishitva and Vashitva. Anima means reducing one's body to the size of an atom; Mahima means expanding one's body to an infinitely large size; Garima means becoming infinitely heavy; Laghima means becoming weightless; Prapti means having omnipresence; Prakambya achieving whatever one desire; Ishitva means possessing absolute lordship; and Vashitva means having the power to subjugate all. Lord Shiva was blessed by Siddhidatri by being given by all the eight powers

The name of the ninth power of Mother Durga is Siddhidhatri. Siddhidhatri Mata's worship goes on the ninth day of Navratri. It is believed that by worshiping the Siddhidhatri, the other eight deities are worshiped themselves. By making them practicing, all kinds of wishes are fulfilled. We should be worshiped as a refuge in the feet of the mother continuously. Remembrance, meditation, worship of this goddess us to realize the reality of this world and lead to nectar post.

In order to get this innovation of the mother's stages, the rules of worshiping them continuously remained continuously. It is believed that by worshiping them, the devotee gets all the siddhis like Anima, Ladhima, Prapti, Prakamya, Mahima, Ishitva, Sarvakaamavasayita, Dor shravan, Parkama Pravesh, Vaksiddhi, Immortality feeling, Siddhi etc. It has been said that if a person cannot do such hard penance, then he can become an object of mother's grace by chanting, penance, worship according to his power. This verse is used for the worship of the mother. To get the devotion of Mother Jagadambe, it is a rule of chanting it in Navratri on Navratri.

Gandharva + Yaksha + Adya -> means (the sub-devatas of heaven, among whom are Gandharvas, Yakshas, etc.), and the Asuras (demons), the immortal (gods) also, all of them serve.

Siddhagandharva-Yagnyayairsurairmarairpi also sees this textual difference. Yagyagya = one who knows the laws of sacrifices etc.

Meaning: O mother! Ambe, who is everywhere and famous as Mother Siddhidatri, I bow to you again and again. Or I salute you repeatedly. O mother, make me the object of your grace.