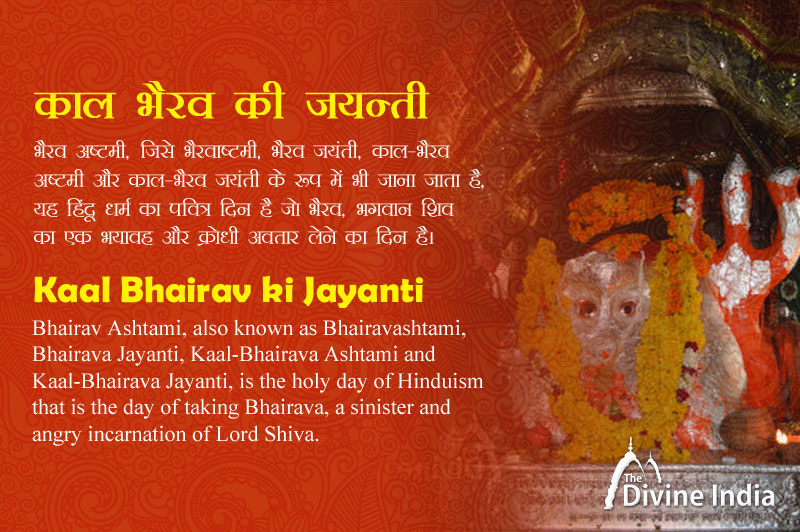 Bhairav ​​Ashtami, also known as Bhairavashtami, Bhairava Jayanti, Kaal-Bhairava Ashtami and Kaal-Bhairava Jayanti, is the holy day of Hinduism that is the day of taking Bhairava, a sinister and angry incarnation of Lord Shiva. This day is celebrated as the birth anniversary of Bhairava. It falls on the fifteenth day (Ashtami) of the Hindu month of Kartik, in the fortnight of the decreasing moon (Krishna Paksha). Bhairav ​​Ashtami falls on a single day in November, December or January. The name Kalashtami is sometimes used to refer to this day, but can also refer to any Ashtami in the Krishna Paksha, all these are the holy days of Bhairava, also known as Dandapani. Lord Bhairav's vehicle is a dog, that is, Lord Bhairava rides a dog.

Bhairava is the incarnation of Lord Shiva in the form of anger. It can be said that Bhairava is the manifestation of Lord Shiva's wrath. According to the narrative narrated on this occasion, the trinity gods, Brahma, Vishnu and Shiva were talking in a serious mood about who was the best among them. In this debate, Shiva got a little angry with the comment made by Brahma and instructed his gana Bhairava to cut off one of the five heads of Brahma. Bhairava obeyed Shiva's command and one head of Brahma was cut off and thus he became the four head. Filled with fear, all the others prayed to Shiva and Bhairava.

According to the legend, when Brahma insulted Shiva, Kaal Bhairava appeared from the forehead of the enraged Shiva and cut off Brahma's head, leaving only four heads. Due to the sin of killing Brahma, Brahma's head got stuck on the left palm of Bhairava - Brahmana or Brahmanism. To get rid of the sin of Brahmana, Bhairava had to fast for a Kapali. Wandering the world as a naked beggar with the skull of a beggar as his beggar. Bhairav's sin comes to an end when he reaches the holy city of Varanasi, where a temple dedicated to him still exists.

The mantra for worshiping Kaal Bhairav is-

When is Kaal Bhairav Jayanti in 2023?