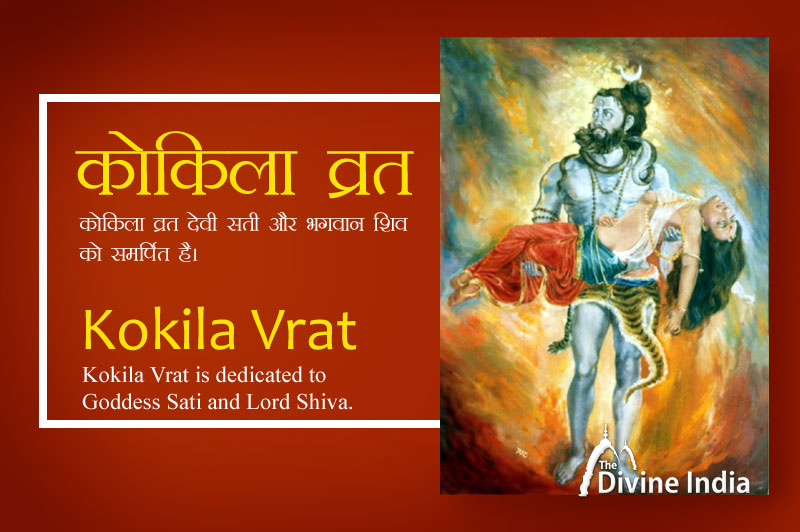 Kokila fast is observed on the full moon day of Ashadha month. This fast is more prevalent in South India. The women who observe this fast wake up before sunrise and after bathing use fragrant perfume. It lasts for eight days from the rule. In the morning, there is a law to worship Lord Surya Dev.

Kokila Vrat is dedicated to Goddess Sati and Lord Shiva. The name Kokil is referred to as the Indian bird cuckoo and is associated with the goddess Sati. It can be understood through a story.

Once Prajapati Daksha performed a huge yajna. All the gods were invited in this yagna, but they did not invite their son-in-law, Lord Shiva. When Sati came to know about this, she expressed her intention to visit her husband Lord Shankar. Shankar ji refused to go there without invitation but stubbornly Sati went to her maternal home. Sati was grossly insulted and disrespected upon reaching the maternal home. Because of this Sati jumped into the Yajna Kunda of Prajapati and was consumed. When Lord Shankar got the news of Sati being consumed, he was filled with anger. Lord Shiva ordered Veer Bhadra to kill Prajapati Daksha. Lord Vishnu tried to calm this viplava. The wrath of Lord Ashutosh became silent but cursed his wife Sati, who defied the order, to roam for ten thousand years as a Nightingale. Sati lived in Nandan forest for ten thousand years in the form of Nightingale. After this, after the birth of Parvati, she fasted for one month regularly in the month of Ashada, as a result of which Lord Shiva got her again as a husband.