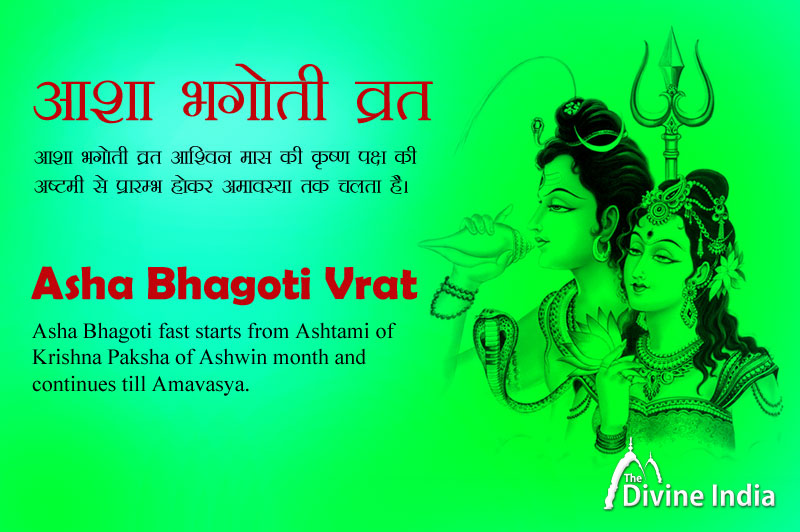 On this day, eight corners of the kitchen leap with dung mud. Hearing the story of Asha Bhagoti, there are eight coaches on those eight corners, eight rupees, eight roli spatter, eight henna spatter, eight kajal ki baandi, one each pleasant and one fruit offering. Light a lamp on all eight corners. Worship this day for eight days and listen to the story. On the eighth day, a honeymoon box rises at the eight corners. On the eighth day, take out the left hand of eight suhauls and give it to Sasuji by touching the feet. This fast should be done for eight years. Light up in the ninth year.

In the year in which Udyapan is to be done, keep Kajal, Bindi, Bangle, Mehndi, Beechiya, Saree, Mirror, Kangha, Sindoor, Roli etc. from eight honeycomb boxes, according to your reverence and your ability, and keep four mitti and four faded papdis in it and eight Suhagin should give food to the women and give it to them.

There was a king in Himachal. He had two daughters. His name was Gaura and Parvati. One day the king asked his two daughters - Whose fate do you eat? Parvati said - Father, I eat my destiny, but Gaura said - I eat your fortune. Hearing this, the king married Gaura to the young man of a royal family and married Parvati to Shivji, dressed as a beggar on the way. Shiva went to Mount Kailash with Parvati. On the way, wherever the feet of Parvatiji were found, there would be burning of grass (grass). Shiva asked astrologers what was the fault. Wherever Parvati sets her feet, her spirit gets consumed, the pundits told that if she goes to her maternal home and observes the fast of Asha Bhagoti, then its fault will be erased. Pandito told Shiva and Parvati to wear Parvati ji's maid, wearing very good clothes and wearing ornaments. On the way, he saw that the queen was going to be the child of a queen.

Seeing this suffering, Parvatiji said to Shiva - O Nath! It is very hard to have a baby, so tie my womb. Shivji explained that do not bind the womb otherwise you will regret it. After going a little further, he saw that Parvati, seeing the suffering of the mare's child, caught hold of her lips to close her womb. In the end, being disappointed, Shiva closed Parvati's womb. After this, they moved forward. Parvati's sister Gaura was very unhappy in her mother-in-law's place, and Parvati refused to recognize Parvati when Parvati reached her maternal home. Raja Rani was very happy when Parvati revealed her name. The king remembered his old saying that he had said. The king asked Parvati again, whose fate do you eat Parvati replied, I eat my destiny. Having said that, Parvati went to her sisters-in-law. There is no preparation for his sisters Asha Bhogati's power, so I said that if there is no preparation for my power, I would also make power. Sister-in-laws said, "What do you miss? You tell Shivji that he will get all the preparations done ”. Parvatiji asked Shivji to bring the same to make power - Then Shivji said to Parvati, take this Agunathi (mudrika), you will get whatever you ask for it.

Parvati ji demanded the same as Ujman from that ring. Mudrika immediately brought all the goods along with the box of nine honey. Seeing all this, Parvati's sisters said that we had been preparing for lighting for eight months, when the stuff has been prepared and after completing all the preparations within a short time, they all fasted together and made a lot of light. Shiva asked Parvati to walk. Then the father-in-law asked Shankar to have food. The king gave them beautiful food and many types of sweets. Seeing this, everyone said that Parvati was married to a beggar, but she is ruling with her destiny. Shankarji finished eating all the kitchen items and there was little thin vegetable left in the kitchen. Parvati ji ate the same vegetable and drank water and went with her husband.

On the way, both the creatures sat under a tree to slow them down. Lord Shiva asked Parvati, "What have you eaten? Parvati said, O Nath! You are transnational. You all know then why are you asking like this ”. Shankarji said, "There was only a little thin vegetable left in the kitchen, you are coming after drinking the same vegetable and water". On this, Parvati ji said, "Maharaj! You have opened all my poles, now do not open any further, I have always kept the respect of the in-laws in the house and the honor of the mother-in-laws After this, the cow which had dried up on moving forward turned green. Shankar ji thought that Parvati's fault had been erased and on moving ahead, Parvati saw that the same queen was going to worship the well. Parvatiji asked what is happening, Maharaj, then Shiva said that this is the same queen who was suffering from childbirth. Now this boy is going, so the well is going to be worshiped, Parvati ji said - Maharaj, open my womb too, Shivji said, how should I open now, I had already said that do not stop the womb but you have stubbornly caught up. On this Parvati ji stubbornly said that if I do not open my womb, then I will give up my life in this expression. Seeing the obstinacy of Parvatiji, Shiva created Ganesha from the filth of Parvati. Parvati did many good deeds and worshiped the well.

Parvati ji started saying that if I will distribute the honey, then there will be noise everywhere that Parvati ji is distributing the honey, which is to be taken, take the common man, he took the honey by running, but the women of high family got late in reaching. Parvati also gave a little honey to these women. Thus, Parvatiji did not return disappointed to anyone.