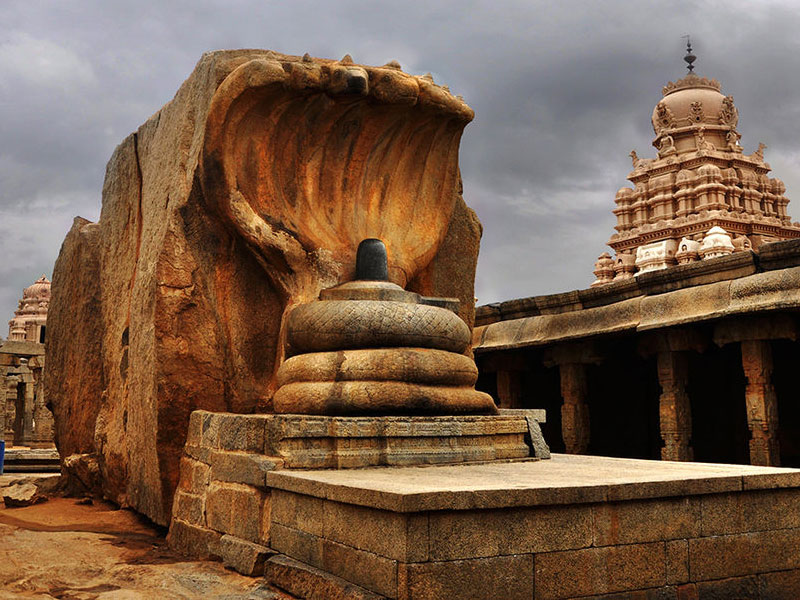 The Virbhadra Temple is a Hindu temple located at Lepakshi in Anantapur district of Andhra Pradesh, India. This temple was built in the 16th century. This temple has many features, one of which is that 72 Pillars have been used in the construction of this temple. One of these 72 Pillars is a Pillar which is not ground up ie it is raised slightly above the ground. People slides clothes from one side to the other side. For this reason, this temple is famous not only in India but all over the world.

Further features of this temple are in the Vijayanagara style with carvings and paintings on almost every exposed surface of the temple. It is one of the monasteries protected by the Center of National Importance. Fresco paintings with scenes of Rama and Krishna from epic tales of the Ramayana, Mahabharata and Puranas are particularly detailed in very bright fabrics and colors. About 200 meters (660 ft) away from the temple is a very large Nandi (bull) of Shiva, carved out of a single block of stone, which is said to be the largest of its type in the world.

The temple is built on the southern side of the city of Lepakshi, on a low-altitude hill of a large expanse of granite rock, which is in the shape of a turtle, and is therefore known as Kurma Saila. It is 140 kilometers (87 mi) from Bangalore. The approach from NH-7 to Hyderabad, which leads to Lepakshi on a branch road on the Karnataka-Andhra Pradesh border, is 12 kilometers (7.5 mi) away. Another route to reach the temple is a route from Hindupur. It is located 35 kilometers (22 mi) from Penukonda in Anantapur district of Andhra Pradesh.

The temple was built in 1530 B.C. By Virupanna Nayaka and Viranna, both brothers who were under the Vijayanagara Empire during the reign of King Achyutaray at Penukonda. The cost of construction of the temple was reduced by the government. According to Skanda Purana, the temple is one of the Devakshetras, an important pilgrimage site of Lord Shiva.

The temple is of Vijayanagar architectural style. The main temple has been built in three parts, these are: the assembly hall known as Mukha Mantapa or Natya Mantapa or Ranga Mantapa. The Ardha mantapa or antarala (former chamber) and the sanctum sanctorum, the temple, as a splendor, are surrounded by two enclosures. The outermost walled enclosure has three gates, with the northern gate being used regularly. The inner eastern gate is an entry into the assembly hall, which is a large open hall, with a large space in the central part.

The roof of the hall of the temple is completely covered with frescoes, including scenes from epics, Mahabharata, Ramayana and Puranas, along with lifelines of the beneficiaries of the temple. Painting in each bay on the roof of the main pavilion, Antrala and other temples shows the grandeur of Vijayanagara painting art. They are painted on an early plaster layer of lime mortar. The color scheme includes yellow, ocher, black, blue, and green vegetation and mineral colors that have been mixed with lime water. The background is usually depicted in red. In addition to the figures of the gods and goddesses, the devotees also portray the incarnations of Vishnu, despite arranging in rows of devotees. The paintings are in striking compositions with particular emphasis on period and costumes.

The fresco in the roof of the Arda Mantapa (former chamber), which is said to be Asia's largest, measures 23 feet 13 feet. It has murals of 14 incarnations of Lord Shiva: Yoga Dakshinamurthy, Chandes Anugraha Murthy, Bhikshatana, Harihara, Ardanarishwara, Kalyanasundara, Tripurantaka, Nataraja, Gouriprasadaka, Lingodhbava, Andhakasurasmahara and so forth.

Within the premises of the temple, on the eastern wing, is a separate chamber with Shiva and his consort Parvati carved on a rock. Another pilgrimage room has an image of Lord Vishnu.

Within the temple, on its eastern side, is a large stone edifice of granite stone, carved into a coiled multi-hooded serpent, giving a brilliant cover over a linga.