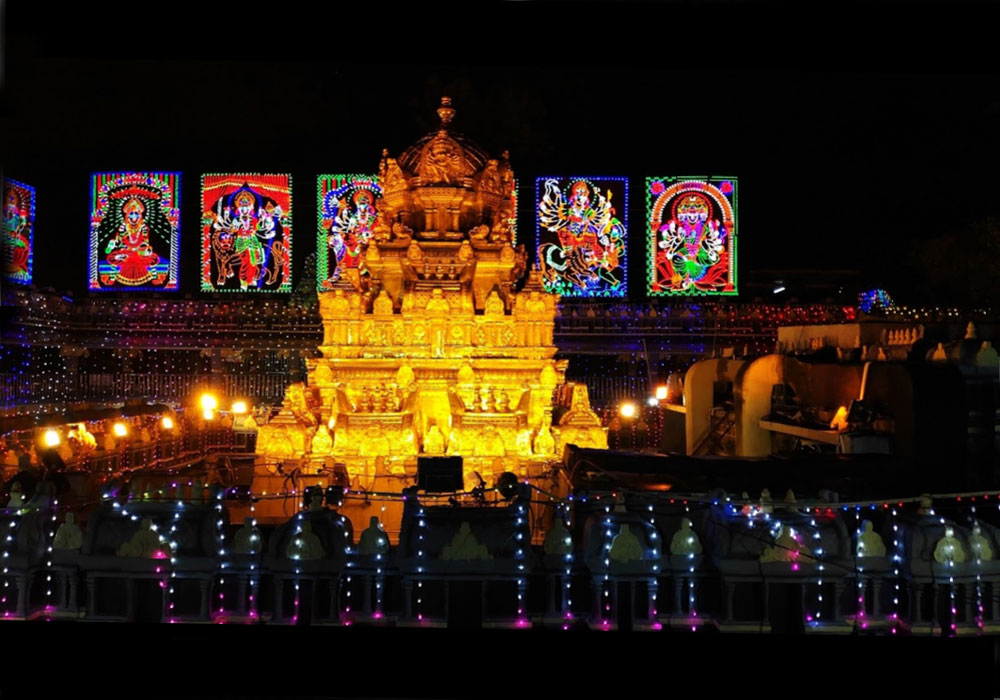 Kanak Durga Temple is a Hindu temple located in Vijayawada in the Indian state of Andhra Pradesh. This temple is one of the famous temples of Andhra Pradesh. This temple is completely dedicated to Mata Durga. The temple is situated on the Indrakiladri hill, on the banks of the Krishna River. Goddess Kanaka Durga is mentioned in the Kalika Purana, Durga Saptashati and other Vedic literature. Kanak Devi is described as Swayambhu.

Kanak Durga is also considered as the form of 'Goddess Shakambhari'. Shakambhari festival is celebrated here. The main temple of Maa Shakambhari in the country is in the Shivalik mountain range near Saharanpur in Uttar Pradesh.

The temple has a 4-foot-high statue of Mata Kanaka Durga and is decorated with magnificent and beautiful ornaments. It depicts the eight armed form of the mother and depicts the Mahishasura slaughter.

There is a mythology associated with the temple - when the demons have wreaked havoc on the earth. Then Mata Parvati took different forms to kill the demons. He took the form of Kaushiki to kill Shumbha and Nishumbha, Mahishasuramardini for the slaughter of Mahishasura and Durga for Durgamasura. Kanaka Durga ordered his devotee to be installed as a mountain so that he could reside there. On the Indrakiladri mountain, while slaying Mahishasura, mother is riding on a lion with eight arms in her arms. Lord Shiva is also installed as a Jyotirlinga on a nearby rock. Brahma worshiped Shiva here with the flowers of the Malelu (Bela), hence the name of Shiva established here became Maleeshwar Swami.

It is believed that Indra Dev also comes here to visit, hence the name of this mountain is Indrakiladri. In Sanatan Dharma, any goddess is placed on the left of the deity, but here the mother is installed on the right side of the god Maleshwar.

Another mythological story is that Arjuna prayed to Lord Shiva on the top of Indrakila hill to win the battle and received his blessings. After this victory, the city was named 'Vijayawada'.

Special puja is done during Dussehra which is also known as Navaratri. The most important are Saraswati Puja and Theppotsavam.

The festival of Dussehra for Goddess 'Durga' is celebrated here every year. A large number of pilgrims participate in colorful ceremonies and take a holy bath in the Krishna River.

The annual Goddess Shakambhari festival is celebrated in the month of Aashaadh with special sanctity and ceremonies. During the three-day long festival Devi, Kanaka Durga Banashankari takes the form of Shakambhari or Banaskari Amma of the Amma Temple, in which the goddess is prayed to bless all vegetables, agriculture and food so that all sections of society So that we can get plenty of nutrition. It is celebrated every year from the Shukla Paksha Trayodashi to the full moon of Ashadha month. Devi Shakambhari Temple is located in the Shivalik mountain range near Saharanpur North in Uttar Pradesh.