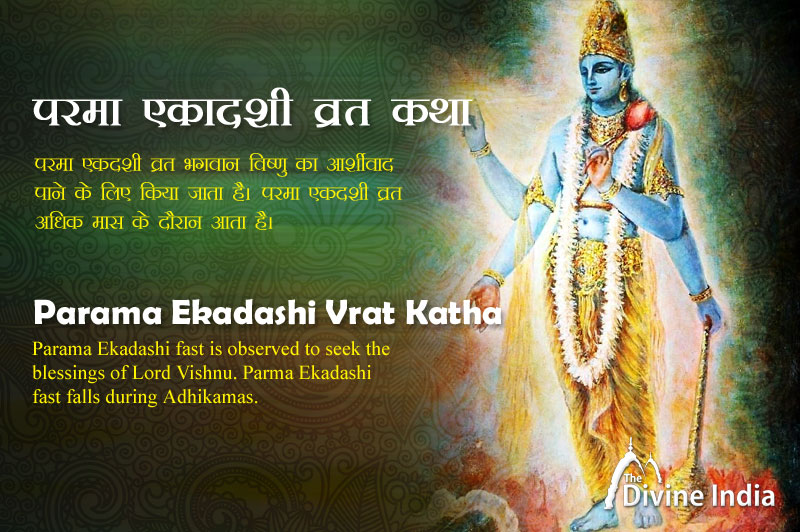 Shri Yudhishthirji said that - O Janardan! Now you tell the name of the Ekadashi of Krishna Paksha of Adhik (Laund) month and the method of its fasting. Shri Krishna said that O Rajan! The name of this Ekadashi is Parma. By observing this fast all the sins are destroyed and one gets freedom in this world and in the hereafter. Its fasting should be done in the aforesaid method and Lord Narottam should be worshiped with incense, lamp, naivedya, flowers etc. Let me tell you a beautiful story about this Ekadashi which happened with the great sages in the city of Kampilya. You listen carefully. A Brahmin named Sumedha lived in Kampilya Nagar. His wife named Pavitra was very pious and virtuous. She was very poor due to some previous birth. He did not get alms even after begging. He is always without clothes even in his own. Used to serve her husband. She used to starve herself by giving food to the guest and never asked her husband for anything.

When Sumedha saw his wife very weak, he said - O dear! When I am rich. When I ask for money from him, he does not give me anything. The household runs only with money, what should I do now. That's why if you have opinion, then I should venture abroad. On this, his wife humbly said, "Husband! Whatever the husband says, good or bad, the wife should do the same. The people who do education and land in the previous birth, only they get education and land in this birth. If a man does not donate, then God gives him only food. I can't bear your separation. Mother, father, brothers, father-in-law and relatives etc. condemn a husbandless woman in the world, so you should stay in this place.

Once Kaundinya Muni came to that place. Seeing him coming, the woman along with Sumedha bowed down and said - We are blessed today. Today our life became successful because of your darshan. He gave them a seat and food. After giving food, Pavitra said that O Muni! You tell me the solution to destroy poverty. I have stopped my husband from going abroad to earn money. By my luck you have come. I am sure that now my poverty will be destroyed soon. Therefore, you tell any fast to destroy our poverty. On this, Kaundinya Muni said that all sins, sorrows and poverty etc. are destroyed by fasting on the Parama Ekadashi of the Krishna Paksha of Mal month. The person who fasts on this becomes rich. In this fast, one should stay awake at night with dancing, singing etc. Mahadev ji made Kubera wealthy by observing this fast. Due to the effect of this fast, truthful Harishchandra got son, wife and kingdom. That sage told him all the methods of fasting on Ekadashi. That sage again said that Brahminji! Panchratri fasting is even better than this. On the day of Parma Ekadashi, early in the morning, after retiring from daily work, the Pancharatri fast should be started. The person who observes a waterless fast for five days goes to heaven along with his parents and wife. Those who eat food in the evening for five days go to heaven. The person who bathes and feeds Brahmins for five days, gets the fruit of feeding the whole world. Those who donate a horse in this fast get the fruit of donating all the three worlds. Those people who donate to the best Brahmin with mole equal to the number of mole go to Vishnu Lok.

Those who remain celibate for five days enjoy in heaven along with the goddesses. O holy one! You observe this fast with your husband. By that you will get success and in the end you will go to heaven. According to Kaundinya Muni, he fasted for five days on Parma Ekadashi. When the fast was over, he saw that the prince was standing in front of him. The prince gave a perfect planet which was decorated with all things to live. The prince gave him a village and went to his palace. With the effect of this fast, both of them went to heaven after enjoying eternal happiness in this world. Shri Krishnaji said that O Rajan! the man who

One observes fast on Parma Ekadashi, he gets the fruits of all pilgrimages, donations etc. Just as the Brahmin is the best among the two-legged, the cow among the four-legged, Indraraj is the best among the gods, in the same way, the month of Adhik (Laund) is the best among the months. Panch Ratri in this month is very auspicious. Padmini and Parma Ekadashi are also best in this month. All sins are destroyed by his fast. A weak person must definitely observe a fast. Those people who do not bathe and fast on Ekadashi for a long time, they commit the sin of suicide. This human form meets with great virtues. That's why man must fast on Ekadashi.

Hey Yudhishthir! What you asked me so. I told you. Now observe this fast with devotion. The people who fast on the Parama Ekadashi of Adhik Maas (Lound) go to heaven and enjoy the pleasures like Indra and are worshiped in all the three worlds.