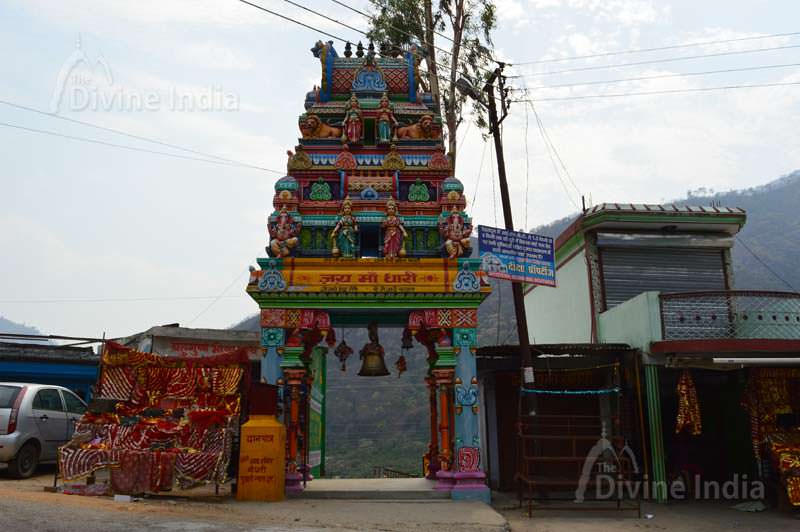 Dhari Devi temple is a Hindu temple dedicated to Devi Kali Mata.  Dhari Devi godess is considered as guardian deity of Uttarakhand. The temple is located in Kalyasaur along the Srinagar -Badrinath Highway on the banks of the Alaknanda River in the Garhwal Region of Uttarakhand state, India.
It is about 15 km from Srinagar, Uttarakhand, 20 km from Rudraprayag and 360 km from Delhi.

The upper half of an idol of a diety came flowing down along the Alaknanda river and settled here. Since then the idol is worshipped here in the form of Goddess Dhari. The Goddess is believed to change appearance during the day. According to local lore, the deity changes appearance from a girl, to a woman, and then to an old lady. The idol's lower half is located in Kalimath, where mata is prayed in Kali roop.

Kalimath is one of 108 shakti sthals in India. As per religious tradition Kalimath is the place where Godess Kali killed the demon Raktabija and after that the godess had gone under the earth.

A large number of devotees visit the temple throughout the year. Out of the many festivals celebrated in Dhari Devi Temple, the important festivals are Durga Puja and Navratra, when a special Puja is organized in the temple. The temple is decorated with beautiful flowers and light.

A manifestation of Goddess Kali, Dhari Devi is revered as the protector of the Char Dhams. When the idol of the deity was removed from her temple then after few hours a very severe cloudburst took place. As per the devotees, the place had to face the Goddess’ ire as she was shifted from her ‘mool sthan’ (original abode) to make way for a 330 MW hydel project. That project lies in ruins after the flood. A similar attempt in 1882 by a local king had resulted in a landslide that has flattened Kedarnath.