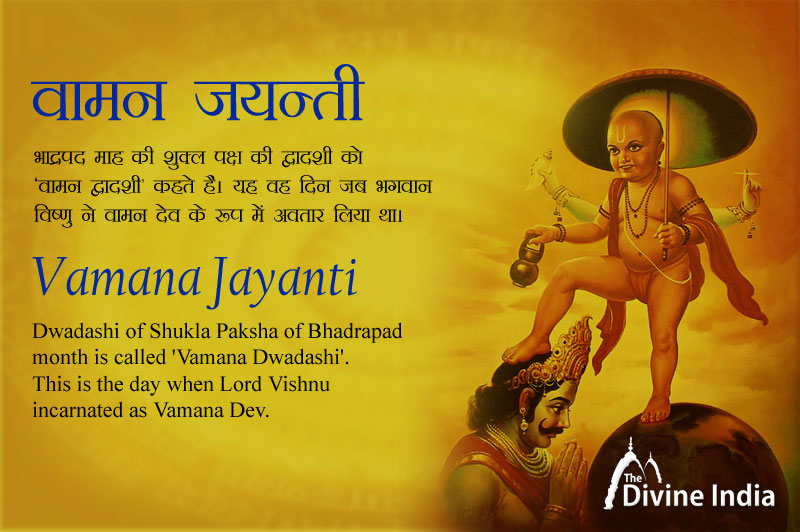 Vamana Dev was born as the son of Rishi Mata Aditi and Kashyapa in the Abhijit Muhurta on Shukla Paksha Dwadashi of the month of Bhadrapada when Shravan Nakshatra was in vogue. He was the twelfth among the Adityas. It is believed that Vamana Dev was the younger brother of Indra Dev.

On this day, install a statue of Lord Vaman with gold or yagyopavit and donate the excess in a golden vessel, offer fruits, flowers and fast.

They worship 52 trees and 52 Dakshina in front of the golden idol of Lord Vamana. By offering bhog to Lord Vamana, he observes the fast by donating curd, rice, sugar, sherbet and Dakshina Brahmin in the Sakoras. On the same day do Ujman (fasting celebration). In Ujman, Brahmins give 1 garland, 2 Gaumukhi kamandal, lathi, asana, Gita, fruit, umbrella, khadaun and Dakshina. By observing this fast one gets heaven.

According to the Bhagavata story, Lord Vishnu took this incarnation to restore Indra's authority in Devaloka. Devloka was captured by Asura king Bali. Bali was the son of Virochan and grandson of Prahlada and was known as a compassionate demon king. It is also said that through his austerity and strength, Bali acquired suzerainty over Trilok. Vamana, under the guise of a dwarf Brahmin, went to Bali and urged him to give three steps worth of land for his stay. He had a wooden umbrella in his hand. Despite Guru Shukracharya's warning, Bali promised Vaman.

Vamana Dev increased his size so much that in the first step, he measured the entire bhoolok (earth). In the second step, Devlok was measured. After this, Brahma washed the feet of Vamana with the water of his kamandal. There is no land left for the third step. Convinced of the promise, Vamana then presented his head to take the third step. Vamana was very pleased with Bali's commitment. Since Bali's grandfather Prahlada was a great devotee of Vishnu, Vamana Dev (Vishnu) decided to give Bali to the Hades and put his third step in Bali's head, which resulted in Bali reaching the Hades.

According to another legend, Vamana granted immortality to Bali by placing his foot on his head. Vishnu appeared in his Virat form and conferred the title of Mahabali to the king because Bali had proved himself to be the Mahatma due to his piety and commitment. Vishnu allowed Mahabali to visit the spiritual sky where he met his virtuous grandfather Prahlada and other divine spirits.