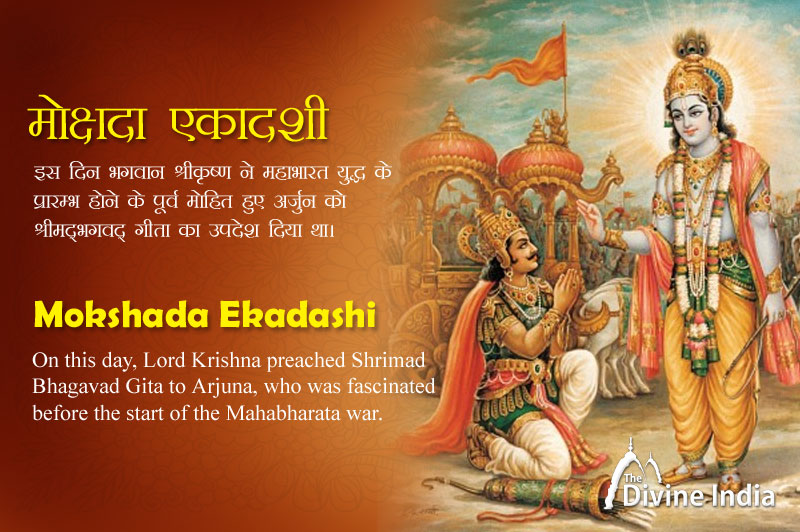 The Shukla Ekadashi of Margashirsha month is called Mokshada Ekadashi. On this day, Lord Krishna preached Shrimad Bhagavad Gita to Arjuna, who was fascinated before the start of the Mahabharata war.

On this day Shri Krishna should be remembered and Gita should be recited. In the Gita, Lord Krishna has given special emphasis on Karma Yoga and has described the soul as immortal and imperishable. Just as a man takes off his old clothes and puts on new clothes, in the same way the soul also leaves the shabby body and takes on a new body.

On the day of Mokshada Ekadashi, giving up false speech, slander and other misdeeds and adopting virtue, one attains salvation.

As the name indicates, Mokshada Ekadashi is an extremely auspicious day dedicated to the worship of Lord Vishnu – Sri Hari to get rid of all your sins and attain Moksha or liberation after death. Ekadashi is celebrated as Gita Jayanti on the same day as Krishna delivered the holy sermon of the Bhagavad Gita to Arjuna, as described in the Hindu epic Mahabharata.

Once, a saint king named Vaikhanasa ruled in the city of Champak with complete compassion to his subjects as his children. His subjects belonged to the Vishnu-worshipping Vaishnava sect and he was very well versed in Vedic knowledge. Once in the night, the king had a dream and saw his late father being tormented in a hell ruled by Yama, the god of death. The king was very sad and told this nightmare to his council the next day. He sought advice from him on how to free his dead father and his ancestors from the torments of Hell and grant them salvation.

The council advised the king to contact the omniscient saint Parvat Muni. The sage meditated and found the cause of the king's father's hellish torture. The sage told that his father used to quarrel with his wife and had committed the sin of having sex with her during menstruation even after the wife's protest.

As a remedy to rectify the situation, the sage suggested the king to observe a fast on the day of Mokshada Ekadashi. On Moksha Ekadashi, the king along with his wife, children and relatives observed the fast with full faith and devotion. The king's religious merit (obtained from the fast) pleased the gods of heaven, who took the king's father to heaven. Mokshada Ekadashi is compared with Chintamani, the gem that fulfills all desires and is obtained by special virtuous fasting, by which one can lift one from hell to heaven or attain salvation himself.