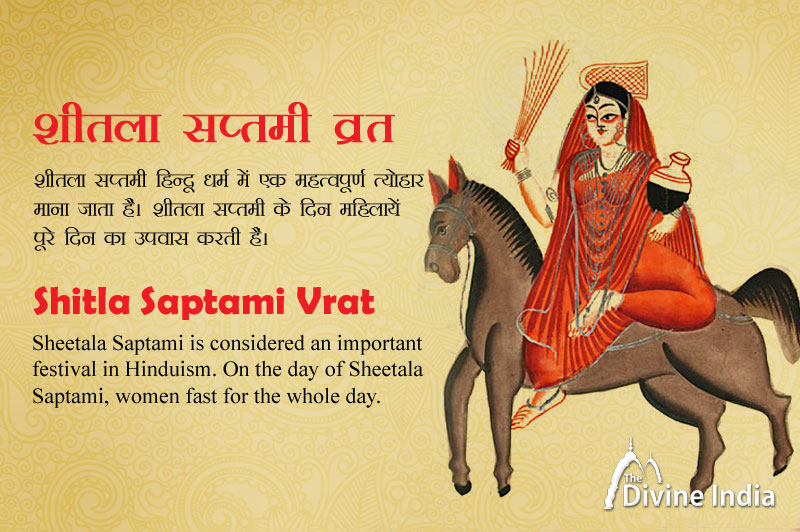 Goddess Sheetala is known by various names in India. For example, in the southern states of India, she is worshiped as 'Goddess Poleramma' or 'Goddess Mariamman'.

In the Indian states of Karnataka and Andhra Pradesh, a similar festival like Sheetala Saptami is celebrated, which is known as 'Polala Amavasya'.

Sheetala Saptami is celebrated twice a year. Earlier, this festival is celebrated on the seventh day of Krishna Paksha of Chaitra month. Sheetla Saptami has special significance in the month of Chaitra. For the second time, this festival is also celebrated on the Saptami of Shukla Paksha of Shravan month. According to the Gregorian calendar, these dates fall for the months of March-April and July-August respectively.

On this day this festival is celebrated with special importance and reverence in all the temples of India. The temple of Goddess Sheetla is situated in Gurugram near Delhi. On this day, a long line of devotees starts in the Sheetla Devi temple since morning and waits for the darshan and worship of the goddess.

Goddess Sheetla is believed to be an incarnation of Mother Parvati. The importance of Sheela Saptami has been described in the Skanda Purana. Shakti is worshiped in two forms in Hinduism. Out of which Goddess Sheetala liberates people suffering from infectious diseases like 'Chickenpox' or 'smallpox' and also represents the healing power by nature.

Goddess Sheetla has been described in Skanda Purana. Sheetlashtak sings the glory of Sheetla Devi, as well as inspires the devotees to worship her. This mantra has been told in the scriptures for the worship of Bhagwati Sheetla:

Meaning - I worship Bhagwati Sheetla, who is seated on the donkey, Digambara, who holds a broomstick and an urn in her hand, the head adorned with soup.

From this Vandana Mantra of Sheetla Mata it becomes completely clear that she is the presiding deity of cleanliness. Having a broom in hand means that we should also be aware of cleanliness. By Kalash we mean that only when there is cleanliness, prosperity in the form of health comes.

According to the belief, by observing this fast, Sheetla Devi is pleased and in the family of the fast, Dahjwar, yellow fever, explosive, foul-smelling boils, all diseases of the eyes, signs of Sheetla's pimples and the defects caused by Sheetla are removed.