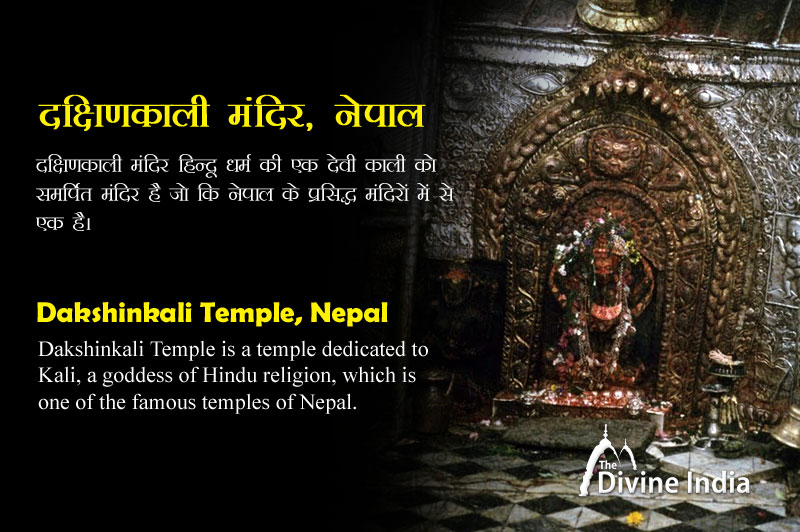 Dakshinkali Temple is a temple dedicated to Kali, a goddess of Hindu religion, which is one of the famous temples of Nepal. Dakshinkali Temple is also known as Dakshin Kali Temple or Dakshina Kali Temple. This temple is located in the village of Pharping, about 22 km from Kathmandu, the capital of Nepal. The importance of the Dakshinkali temple is special in Nepal. Dakshinakali Devi is considered to be an incarnation of Goddess Parvati. Natural forests and hills surround the Dakshinakali temple.

The idol of the Mother Goddess in the Dakshinakali temple is black in color and depicted with her right foot on the chest of Lord Shiva - whereas mostly Goddess Kali is depicted with the left foot on Lord Shiva's chest. The four hands of Goddess Kali symbolize the power of the mother spreading in all the four directions. Mother holds the severed head of a human in one hand and a drawn sword in the other. However, his two other arms signify the blessings of protection and assurance to his devotees. They symbolize the elemental energy, which Kali specifically represents.

The Dakshin Kali Temple also has the same religious significance as the Pashupatinath Temple and Mankamna Temple in Nepal. The temple has high tourist attraction as it is a popular hiking destination located near Pharping village in Nepal. Maa Dakshinakali is the most popular form of Kali. She is the merciful mother, who protects her devotees and children from misfortunes.

There are various stories explaining the origin of the name Dakshinakali. Dakshina refers to a gift given before performing a ritual or to one's guru. Such gifts are traditionally given with the right hand. The two right hands of Dakshinakali are usually depicted in gestures of blessing and granting boons. One version of the origin of her name comes from the story of Yama, the lord of death, who lives in the south. When Yama heard Kali's name, he ran away in fear, and hence it is said that those who worship Kali are able to conquer death themselves. This temple is also located in the southern part of Kathmandu Valley.