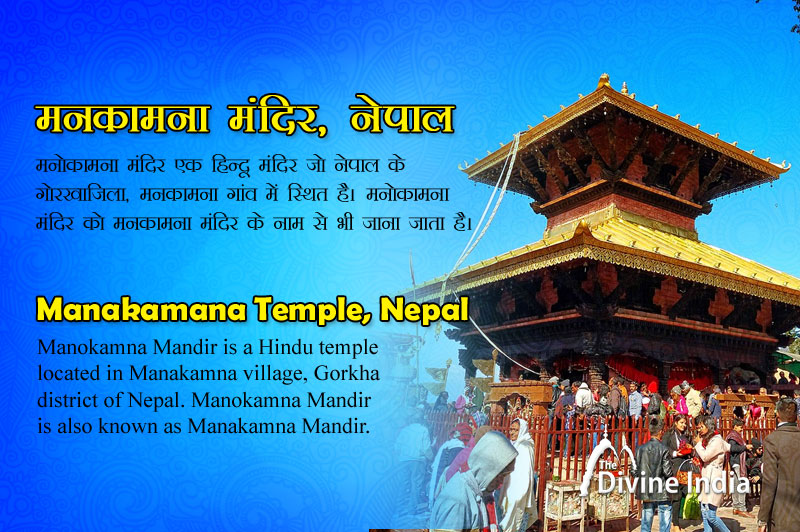 Manokamna Temple is two storeyed and this temple is built in the traditional Nepali pagoda style. Devotees used to reach the temple after walking for about three hours. Which was a walk of about 5 kms. The journey here is only 10 minutes by car to reach the temple.

According to Nepalese legend, Manakamana Temple was built in the 17th century during the reign of two Gorkha kings, Ram Shah and Prithvipati Shah. The Gorkha queen had the 'divine powers' of wishing, which only Lakhan Thapa knew. One day, the king saw his wife as the goddess Manakamna, who was riding a lion, when the king told his wife about Mankamna Devi, the king died mysteriously. According to the historical Hindu custom of sati, the queen sacrificed herself while sitting on the pyre of her dead husband. Before her death, she told Thapa that she would come again, six months later, a farmer working in the field broke a stone, which apparently started a stream of blood and milk. After hearing about this, Thapa went to where the stone was located and Hindu tantriks started performing rituals that stopped the stream.

Later he built a temple at the same place so that everyone's wishes could be fulfilled. Mankamna is believed to be Champavati, the wife of Ram Shah, she reappeared during the reign of her son Dambar Shah, and other sources indicate that she appeared during the reign of Prithvi Narayan Shah, the founder of present-day Nepal. The temple is the holy site of Goddess Bhagwati Devi, an incarnation of Lakshmi as the protector of Garuda. Mana translates as 'heart' and 'Kanna' as 'desire' and it is believed that the goddess fulfills the wishes of her devotees.

The pilgrimage to Manakamana is performed by lakhs of devotees every year. This religious campaign for Goddess Bhagwati Darshan at Mankamna is known as 'Manakamna Darshan'. According to Hindu mythology, the universe is said to consist of five cosmic elements – earth, fire, water, air and sky. On this basis, offerings are made to the goddess. Must contain at least one of the following items of worship:

There is a tradition of animal sacrifice in the temple. Some pilgrims sacrifice goats or pigeons in a pavilion behind the temple. The district government has banned animal and bird sacrifice.

Mankamana is most popular during Darshan (September-October) and Nag Panchami (July-August), during which devotees stand in line for five to ten hours to offer prayers to Goddess Bhagwati