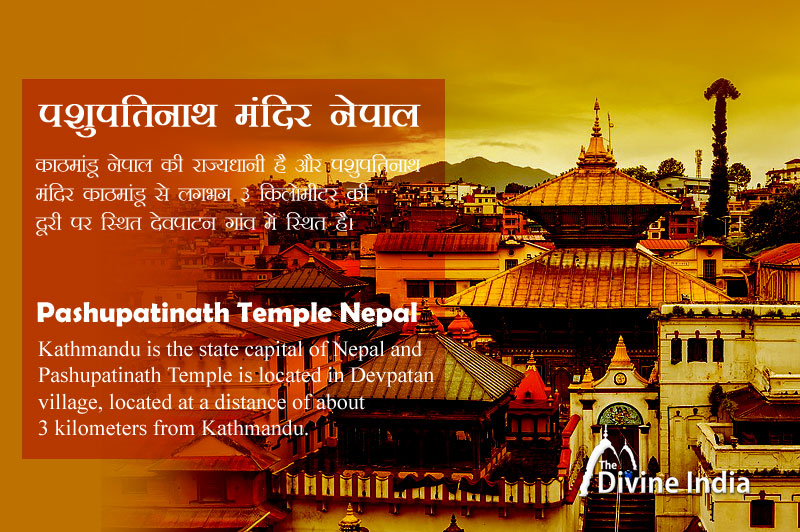 Pashupatinath temple construction is built in pagoda style of Nepal. The temple has two tiered roofs, the main one made of copper and covered with gold. The temple rests on a square base platform with a height of 23m 7cm from base to summit. It has four main doors, all covered with silver sheets. This temple has a golden peak. Inside there are two sanctums: the inner sanctum or sanctum sanctorum is where the Shivalinga is installed, and the outer sanctum is an open corridor-like space.

The inner sanctum of the Pashupatinath temple where the lingam is installed has four entrances – East, West, North, South. From 9:30 am to 1:30 pm. Devotees can worship from all the four doors.

All four doors are also opened during abhisheka from 9 to 11 a.m. Abhishekam is done based on the direction the mukh is viewed.

In Hinduism, there are many festivals throughout the year, such as Mahashiv Ratri, Bala Chaturthi festival and Teej festival. Teej is the most celebrated festival in Pashupatinath temple. The festival of Shivratri is celebrated with special significance in Pashupatinath.

According to a local legend based on Nepal Mahatmya and Himavatkhand, Lord Shiva once left the other deities of Varanasi and went to Mrigasthali, located on the banks of the Bagmati river, in the forest situated on the other bank of the Bagmati river. Lord Shiva took the form of a chinkara there and went into sleep. When the gods discovered him and tried to bring him back to Varanasi, he jumped on the other side of the river. During this his horn broke into four pieces. After this Lord Pashupati appeared in the form of Chaturmukh Linga.

According to a legend, after the war of Mahabharata, Pandavas wanted the blessings of Lord Shiv to get rid of their sins. The Pandavas, searching for Lord Shiv, reached Kedarnath in the Indian state of Uttarakhand, where Lord Shiv had taken the form of a bull. Pandavas had found Lord Shiv and received blessings from him. It is believed that when Lord Shiv disappeared in the form of a bull, the upper part of his torso appeared in Kathmandu. Where now is the famous temple of Pashupatinath. The arms of Lord Shiva appeared in Tungnath, the face in Rudranath, the navel in Madamdeshwar and the Jata in Kalpeshwar. Therefore, with these four places, Shri Kedarnath is called Panchkedar. The journey of Panchkedar is famous in India.