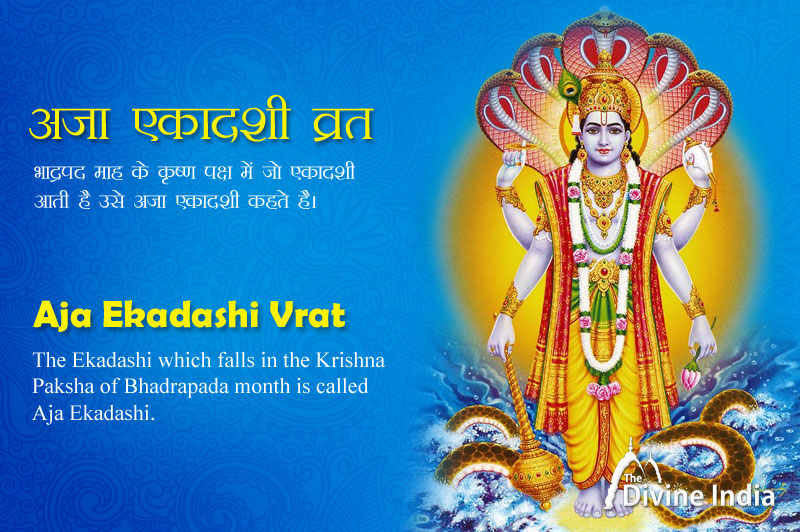 The Ekadashi which falls in the Krishna Paksha of Bhadrapada month is called Aja Ekadashi. It is believed that fasting on Aja Ekadashi gives virtue equal to the Ashwamedha Yagya. On the day of Ekadashi, Lord Shri Hari is worshiped according to the law. The fast and worshipers of Aja Ekadashi get the blessings of Lord Vishnu.

Kunti's son Yudhishthira started saying that Oh Lord! What is the name of Bhadrapada Krishna Ekadashi? Please tell the method of fasting and its significance.

Madhusudan started saying that the name of this Ekadashi is Aja. It is the destroyer of all kinds of sins. On this Ekadashi, there is a law to worship Lord Vishnu. The person who worships Lord Rishikesh on this day must attain Vaikunth. Now listen to its story.

In ancient times a Chakravarti king named Harishchandra ruled. He renounced all his kingdom and wealth under the influence of some karma, as well as sold his wife, son and himself.

As a slave of King Chandala, he kept on accepting the clothes of the dead, wearing the truth. But in no way deviated from the truth. Many times the king drowned in the sea of ​​worry and started thinking in his mind that where should I go, what should I do, so that I can be saved.

Thus many years passed for the king. One day the king was sitting in worry that Gautam Rishi had come. Seeing them, the king bowed down and told all his sad story. On hearing this, Gautam Rishi started saying that Rajan, seven days from now onwards, Ekadashi named Aja of Bhadrapada Krishna Paksha will come, by your luck, you should observe a fast on it.

Gautam Rishi said that all your sins will be destroyed by the virtuous effect of this fast. Thus, telling the king, Gautam sage disappeared at the same time. According to his statement, on the arrival of Ekadashi, the king observed fast and awakening methodically. With the effect of that fast, all the sins of the king were destroyed.

The horns started ringing from heaven and flowers started raining. He saw his dead son alive and his wife with clothes and ornaments. Due to the effect of the fast, the king got the kingdom again. In the end he went to heaven with his family.