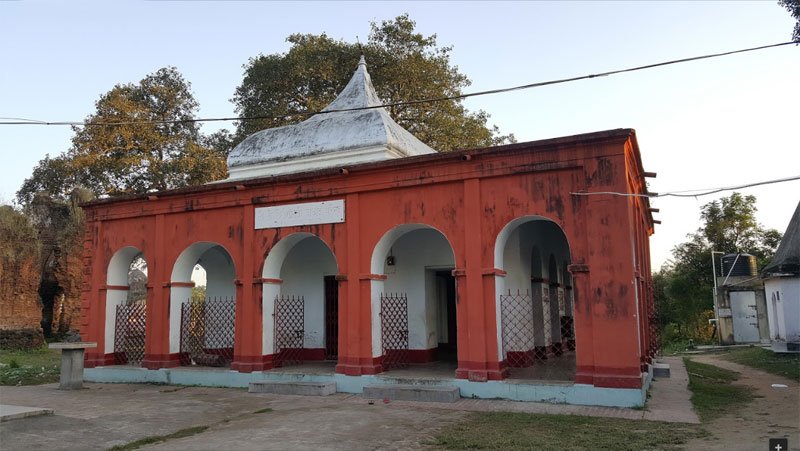 Kirit Shakti Peeth and Kiriteswari Temple is located in Kiritkona village under Nabagram (Community Development Block) in Murshidabad district of the state of Kolkata (West Bengal) of India.  Kirit Shaktipeeth is also known as Mukteshwari Temple, because at this place the crown of Mother Sati had fallen.

According to Puranas or Hindu mythology this place was named Kiriteshwari. The Kiriteswari Temple is one of the 51 Shakti Peethas. Here the Shakti Vimla or Bhubaneswari and Bhairav is Samvarta. The construction of this temple is more than 1000 years old. This place was considered to be the sleeping place of Mahamaya. Local people call this temple Mahishamardini. The original temple was destroyed in 1405. The present temple was built in the 19th century by Raja Darpanarayan of Lalgola. This is the oldest temple in Murshidabad district.

According to mythology, Devi Sati gave her life by jumping into the fire of Havan organised by her father King Daksheshwara. When Lord Shiva was running around the earth carrying her body then Lord Vishnu divided the body in 51 parts using his Sudarshan chakra. Out of those 51 parts, from which the crown of sati fell to this place.

All the festivals are celebrated in the Kiriteshwari temple, especially in the festival of Durga Puja and Navaratri is organized special puja. On this day, the temple is decorated with flowers and lights. The spiritual atmosphere of the temple provides peace to the heart and mind of the devotees.