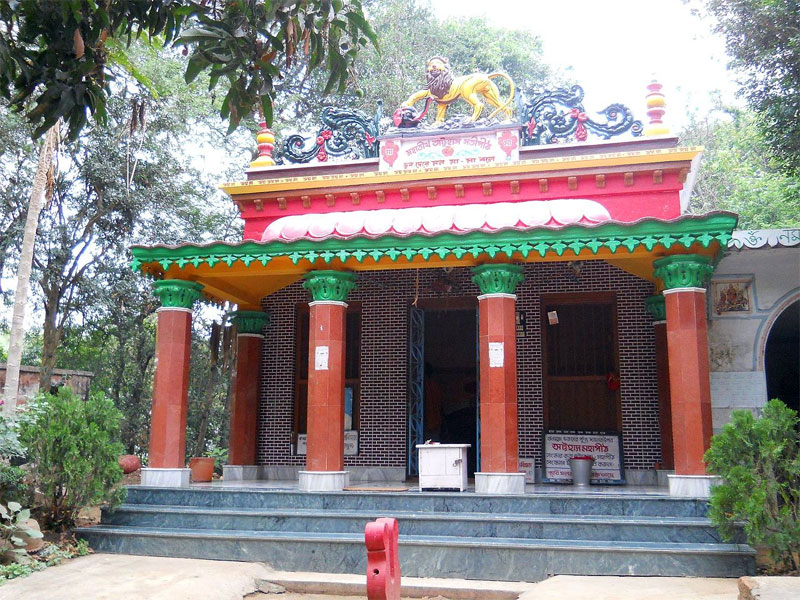 Attahas Shaktipeeth is one of the main religious places for Hindus. This temple is located in 'Labhpur' of West Bengal, India. The temple is located in the Nirol Gram Panchayat in Katwa subdivision of Purba Bardhaman district of West Bengal. It is about 5 km from the Nirol bus stand and beside the Ishani river (locally known as Kandor River). The word Atta and Hasa is comes from Sanskrit language which meaning is ‘Extreme loud laughter'. Attahas Shakti Peeth is also known as Phulara Devi Temple. This temple is a prominent place for the people of the Shaktism (Goddess is worshiped) of Hindu religion.

Attahas Shaktipeeth Nature Beauty is unique. This place could also be an ideal weekend holiday destination for those who love nature. This temple is located on the banks of the river Ishani, situated between the forest with different species of birds and trees.

It is believed that the statue of the temple was in the temple till 1915. After that, original Idol was kept in the Museum of 'Bangiya Sahitya Parishad'. This statue was made of metal. After the re-installation of the statue, the idol was robbed.

This temple is one of the 51 Shaktipeeths of Mother. In this temple, Shakti is worshiped as 'Fulala' and Bhairav ??is worshiped as 'Vishwarwar'. According to the Puranas, wherever the pieces of the sati, the clothes or the ornaments held, have fallen, wherever Shaktipeeth came into existence. They are called the most sacred shrines. These shrines are spread across the entire Indian subcontinent.

According to mythology, Devi Sati gave her life by jumping into the fire of Havan organised by her father King Daksheshwara. When Lord Shiva was running around the earth carrying her body then Lord Vishnu divided the body in 51 parts using his Sudarshan chakra. Out of those 51 parts, from which the ‘Lower lip’ of Sati fell to this place.

All the festivals are celebrated in the Athasan Shaktipeeth, especially the special puja on the festival of Shivratri, Durga Puja and Navaratri. During these festivals, some people keep fasting (do not eat food) as a respect and dedication to God's worship. In the days of the festival, the temple is decorated with flowers and lights. The spiritual atmosphere of the temple provides peace to the heart and mind of the devotees.