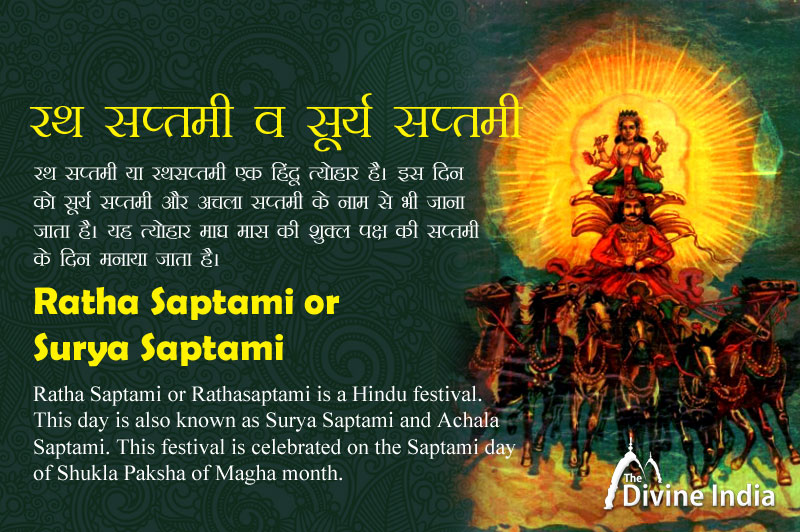 Ratha Saptami or Rathasaptami is a Hindu festival. This day is also known as Surya Saptami and Achala Saptami. This festival is celebrated on the Saptami day of Shukla Paksha of Magha month. This day is completely dedicated to Surya Dev. The day of Ratha Saptami also marks the birth of the Sun God and hence it is also celebrated as Surya Jayanti, the birthday of the Sun God. Surya Dev's father is Rishi Kashyap and his mother is Aditi, on the day of Surya Saptami, Sage Kashyap and his wife Aditi were received as sons of Surya, hence it is celebrated as Surya Jayanti. It is symbolically depicted as the sun god, who drives his chariot by seven horses in a north-easterly direction towards the northern hemisphere. The seven horses of the Sun God's chariot represent the seven colors of the rainbow. The seven horses are also said to represent the seven days of the week, starting with Sunday. Sunday is considered to be the day of Sun God.

On the day of Surya Saptami, the Sun God is offered Arghya with Ganges water. Praise the Sun God with lamps, camphor, incense, red flowers etc.

Praise should be done facing the sun. It does not cause physical skin diseases etc. Sun has great importance in ancient astrology and modern science. The Sun is considered to be the one who gives life to the flora and fauna. Surya Purana should be recited on this day. The charioteer of the sun is believed to be Arun, who is paralyzed. Children are mute and paralyzed at birth. Lord Surya removes these defects with his light.

The importance of worshiping the Sun God is also told in the Vedas of Hinduism and its antiquity is also told in many mythological stories of the world such as China, Egypt and Mesopotamia.

Significance of Surya Saptami in India

Surya marks the transition of Saptami into spring and the beginning of the harvesting season. For most of the Indian farmers, it is an auspicious start of the new year. This festival is celebrated by all Hindus in their homes and in innumerable temples dedicated to Surya all over India.

A legend is narrated by Yashovarma, the king of the Kamboja kingdom, a great king who had no heir to rule his kingdom. On special prayer to God, he got a son. The king's vow did not end here, as his son was seriously ill. A saint who went to the king advised that his son should worship Ratha Saptami and Surya Saptami with reverence to get rid of his past sins. Once the king's son did this, his health recovered and he ruled his kingdom well.