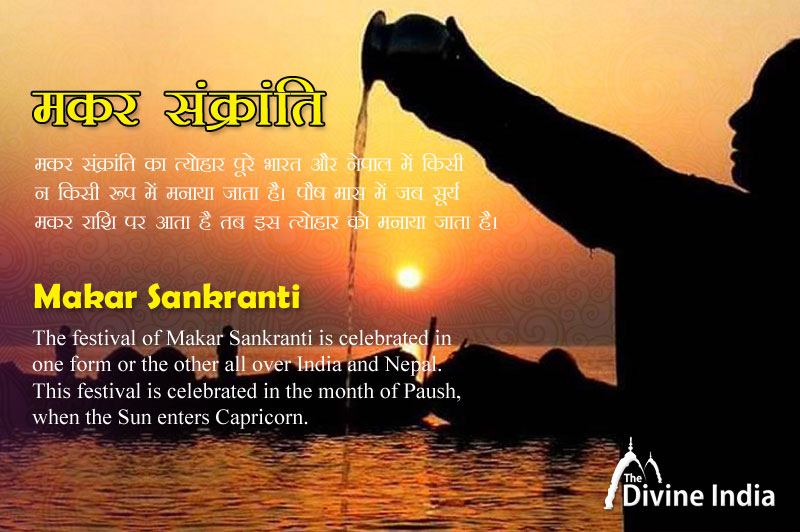 It is believed that on this day, people take bath in the holy Ganga river and then donate the things. The sweets made of Til seasame is also offered to brahamins and elders. Fares are also organised on the banks and ghats of river Ganga.

In Bihar, the festival is known as Khichdi festival. There is a tradition of distributing Urad, rice, til, chiwada, woollen clothes, blankets etc.

The historical significance of Makar Sankranti
It is believed that on this day God Bhaskar visit his son Shani to meet him. Since Shani is the master of Makar rashi so this day is also known as Makar sankranti. In the Mahabharata, Bheeshma decided to give away his life on this day only. On this day only, Ganga followed Bhagirath and passed through the ashram of Kapil munni and finally merged into the sea.

The importance of Makar Sankranti

According to the scriptures, Dakshinayana has been considered as the symbol of negativity, the night of the gods, and Uttarayan, the day of the gods, that is, symbol of positivity. That is why religious activities like chanting, penance, charity, bathing, shraddha, tarpan etc. are of special importance on this day. It is believed that donations made on this occasion are reclaimed a hundred times. On this day, donations of pure ghee and blankets lead to salvation. As is evident from the following verses -

Bathing in Ganga and donations along the ghats of Ganga on this day is considered to be very auspicious. Generally Sun affects all the rashis but the entry of the sun in  kark and makar  is very fruitful as per religious sentiments. This entry and exit process is of six months each

India is situated in northern hemisphere. Before Makar sankranti the sun is situated in southern hemisphere and accordingly it is very far from India. Because of this reason the nights are comparatively longer  and colder than days during this period. From this day, the sun starts moving towards northern hemisphere and from this day the nights start to be smaller than days. Longer days result in more light and small nights mean less darkness. So this day is also considered as movement from darkness to light.

Due to more light, the attention and working capacity of people increase. Because of this reason, the sun is worshipped in different forms all over the India. Generally all the festivals are dependent on the moon in India but this festival is based on the sun so  it is celebrated on 14th January every year.

When is Makar Sankranti in 2024