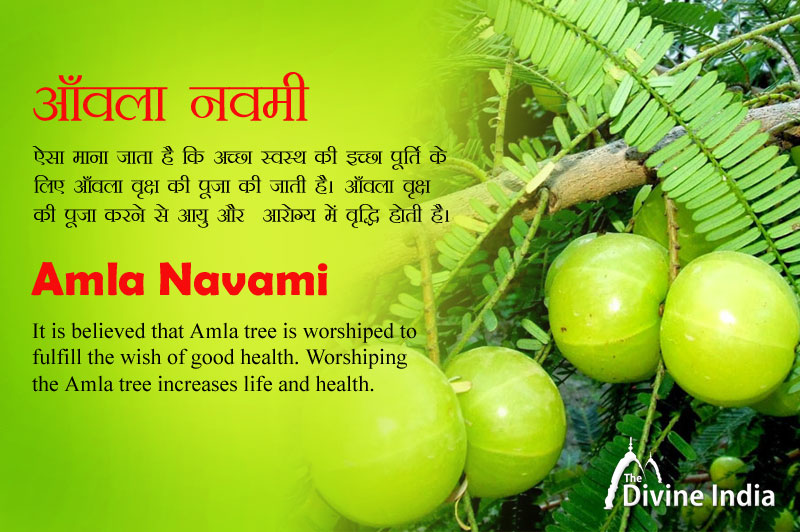 The circumambulation of Mathura-Vrindavan on the day of Akshaya Navami is considered very auspicious. Hindu devotees from all corners of the country gather on this day to earn maximum benefits.

According to mythological belief, Lord Krishna left the streets of Vrindavan-Gokul and left for Mathura. This was the day when Lord Krishna had left his pastimes and stepped on the path of duty.

It is believed that the day of Akshaya Navami was the beginning of Satya Yuga. Hence Akshaya Navami is also known as 'Satya Yugadi'. This day is considered an important day for all kinds of charity and charitable activities. As the name Akshay suggests, doing any charitable or devotional work on this day never diminishes and benefits the person not only in this life but also in the next life.

Akshaya Navami is also celebrated as 'Aonla Navami' in different parts of the country. On this day, the Amla tree is worshipped as it is believed to be the abode of all Gods and Goddesses. In the Indian state of West Bengal, this day is celebrated as 'Jagdhatri Puja', in which the Goddess of Satta 'Jagadhatri' is worshiped with full devotion.

Akshaya Navami is also celebrated as 'Kushmanda Navami' because according to Hindu legends, on this day Lord Vishnu defeated the demon named 'Kushmanda' and obstructed the spread of adharma.

How to worship Amla Navami

After taking bath in the morning, with a pure soul, sitting under the Amla tree in the east direction should be worshipped. After worship, water or raw milk should be given in its root. After this a raw thread should be tied around the tree. Performing aarti with camphor wick or pure ghee wick should be circumambulated seven times. After this, the Brahmin should be given food and donated dakshina under the tree.

A childless virtuous and charitable merchant lived in the city of Kashi. One day, a neighbor said to the merchant's wife, if you sacrifice a foreign boy in the name of Bhairav, then you can get a son.

When the merchant came to know about this, he refused. But his wife kept looking for the spot.

One day he dropped a girl in a well and sacrificed her in the name of Bhairon Devta. The result of this murder was the opposite. Instead of profit, there was leprosy in his body. The girl's spirit started haunting her.

On asking the merchant, his wife told the whole thing. On this the merchant started saying that there is no place in this world for cow slaughter, Brahmin slaughter and child slaughter. That is why you can go to the banks of the Ganges and worship God and take a bath in the Ganges, then only you can get rid of this trouble.

The merchant's wife started living on the banks of the Ganges. After a few days Ganga Mata came to him disguised as an old lady and said that you should go to Mathura and fast on the Navami of Kartik month by circumambulating the Amla tree and worshiping it. By observing this fast, your leprosy will go away.

Listening to the old lady, she went to Mathura after taking permission from the merchant and started fasting on Amla methodically. By doing this she became divine body by the grace of God and she also got the son.

A Seth used to feed Brahmins under the Amla tree on the day of Amla Navami and used to donate gold to them. His sons did not like seeing all this and they used to fight with their father. Tired of the day-to-day strife in the house, Seth left the house and went to live in another village. He set up a shop there for his living. He planted a gooseberry tree in front of the shop. His shop started running well. Here also he started fasting and worshiping Amla Navami and started donating food to Brahmins. On the other hand, the business of his sons came to a standstill. It came to his understanding that we used to eat only by the fate of the father. The sons went to their father and started apologizing for their mistake. According to the orders of his father, he also started worshiping and donating the Amla tree. Due to this effect, happiness came in his house as before.